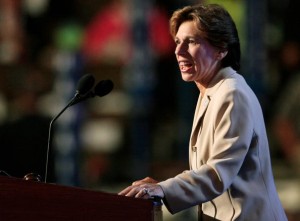 Randi Weingarten, president of American Federation of Teachers, speaks during the 2008 Democratic National Convention in Denver.

The popular perception is that teachers unions have a stranglehold on public education, tying school leaders’ hands, preventing them from firing the bad teachers who can’t hack it in a classroom.

That’s the perception, anyway. The reality may not be so simple.

Shanker Blog has the story of a recently-released study saying unions don’t have as much power to block a principal from firing a teacher as most people think. What’s more, even when principals are explicitly given permission to fire bad teachers, they don’t take advantage of it.

As Shanker‘s Matt Di Carlo summarizes, “Principals don’t let go of a lot of teachers because they don’t want to, not because they can’t.”

In the study, economist and education policy professor Brian Jacob examines a 2004 change in the Chicago Public Schools’ teacher contract that “dramatically reduced the costs of firing a probationary teacher in the district.” (Teachers that haven’t been on the job more than five consecutive years are considered “probationary.”)

Effectively, the contractual tweak allowed principals to fire a probationary teacher “with a simple click of a button” and minimal documentation. But in 30-40 percent of Chicago schools during the time after the rule change, principals decided not to click that button.

Existing teacher contracts in many large, urban school districts actually provide considerably more flexibility than is commonly believed and yet administrators rarely take advantage of such flexibility. The apparent reluctance of many Chicago principals to use the additional flexibility granted under the new contract may indicate that issues such as teacher supply and/or social norms governing employment relations are more important factors than policymakers have realized.

Translation: Firing teachers, even if they can’t cut it anymore, isn’t worth the hassle — especially if the fired teacher’s replacement isn’t easy to find.

The professional culture in most public schools still sees firing as an extreme response to bad performance, instead preferring endless remediation. The supply of decent job candidates is probably not up to demand in CPS, either, meaning the labor market is a barrier to implementing better policies around teacher performance.

Shanker‘s Matt Di Carlo points out the study only looks at probationary, not tenured teachers whose contracts certainly offer more robust protections. But he writes reducing problems in the teaching force down to inflexible teachers unions isn’t fair:

There is little support for the idea that principals are just dying to fire at will — or that, once dismissed, teachers can easily be replaced by “better” alternatives — despite sometimes being taken for granted in our education debates. Although they are far from conclusive, and pertain only to probationary teachers, the descriptive results discussed above tentatively suggest that the supply of appropriate replacements may not always be quite as robust as is often assumed – and/or that there may be some other reasons for low dismissal rates that are not entirely a function of the difficulty of doing so.

What do you think of this? Are principals right to be a bit gun-shy — is there merit to being a little more trigger-happy?