That’s according to projections the National Center for Education Statistics released Wednesday. The figures offer a look into the government’s statistical crystal ball at both a national and a state level.

Here are three of the key projections from the report — click on the graphs to enlarge them: 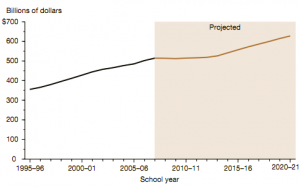 (1) Spending, after a few steady years, will go up. Measured in 2008-09 dollars, education spending was $354 billion in 1995. That number will have nearly doubled to $627 billion in 2020, the NCES projections show. That’s an increase of about 20 percent from current spending — the most recent numbers show the U.S. spends more than $511 billion on education. 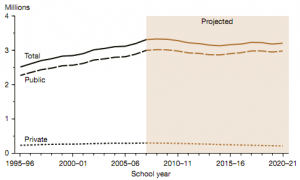 (2) Indiana’s graduation numbers will show a slight decrease, mirroring the national trend. Nationally, the projections show overall graduation numbers will remain largely flat, overall decreasing by 0.6 percent by 2020-21. In Indiana, the statistical models show roughly 2,000 fewer students will graduate from high school — this after an increase of 4,000 graduates between 2002 and 2008. 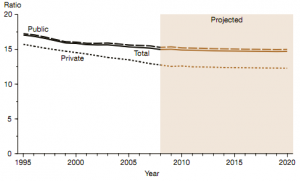 (3) Teacher-to-pupil ratios will fall, if only slightly. It should come as a great relief to teachers to know that they’ll have to deal with 0.3 fewer students in their classroom, on average by 2020 — at least, if the projections hold true. The current teacher-to-pupil ratio from K-12 of 15.0 students per teacher will be 14.7 students by 2020.

Just as key as these findings is the question: Will they hold true? These projections are all based on statistical regression models, but statistics aren’t the whole story.

For example: The spending projections do reflect the current ethos of lawmakers to ‘do more with less’ and hold the line on spending for now — no increases, maybe decreases. But does that mean lawmakers will have to increase spending in the future as these projections suggest?

What do you think? How much weight do we give projections like this?