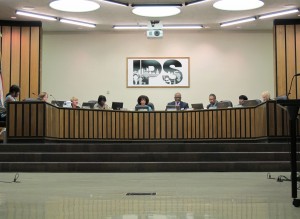 Frustrations from top IPS leaders vented at a school board meeting Thursday, August 26, aren't necessarily shared by everyone in the individual schools.

Was news of state intervention a downer for staff at Indianapolis’s Washington Community High School? No — far from it.

The Indiana Department of Education decided not to take over the school, but instead to enlist the help of two outside organizations to help improve the school’s performance.

Grim says staff were pleased to hear the district had avoided takeover by outside school management companies. Partnering with one of these companies was part of their turnaround plan all along.

Contrast Grim’s statements with the frustrations of the Indianapolis Public Schools leaders, who moved to authorize a lawsuit against the state over its intervention plans Thursday: While the district wants to fight the outright takeover of four other district schools, the much-less-intrusive intervention at Washington means staff can more easily get on board with state-led turnaround efforts.

“If they can help us work smarter, not harder, I’m all for it,” principal Deb Leser told StateImpact Friday. She said teachers at Washington are dealing with heavy workloads, and welcomes the help in improving instruction.

“There wasn’t a whole lot that he said that was flat-out incorrect,” Grim said.

But Grim said what Bennett didn’t discuss in his media rollout of the state’s intervention plan yesterday was that Washington Community High School is in year two of a three-year turnaround plan with the state, which called on a third-party organization to help the school improve its test scores when it was written.

By the state’s calculations, 46.3 percent of Washington Community High School students passed either state standardized tests or required end-of-course assessments for high school math and English last year. That’s down from 48 percent from 2010.

IPS questions these calculations because the four schools the state is taking over — Broad Ripple, T.C. Howe, and Arlington — are “community high schools” (like Washington). That means not only that these schools teach students Grades 6-12 or Grades 7-12, but that the school’s performance numbers come from a mix data used to measure high schools separately from middle schools.

Mixing this data together, IPS argues, is unfair. Indiana Department of Education officials say many other combined junior-senior high schools have been able to hit these performance targets and IPS schools don’t deserve special exemptions.

(This story was updated after its original posting to include reaction from Washington Community High School principal Deb Leser.)