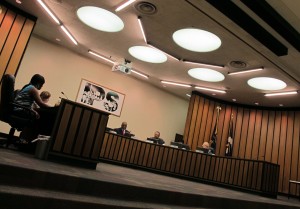 Meeting at Indianapolis Public Schools headquarters on August 25, the IPS board authorized the district to take legal action against the Indiana Department of Education if it goes ahead with its takeover plans.

Hours after the state announced its takeover of seven “failing” public schools, Indianapolis Public Schools officials made good on threats of legal action they’d floated weeks ago Thursday night:  if the Indiana Department of Education takes over their schools, they’ll take the state to court.

The district’s school board authorized the legal action by a 4-3 vote in a regular meeting Thursday night.

Far from painting the potential lawsuit against the state as a last-ditch Hail Mary pass, superintendent Eugene White said IPS attorneys believe the district has a solid case for a discrimination suit.

Why? It all comes back to student performance numbers and how the state calculates them.

IPS officials say the three “high schools” on the district’s takeover list (T.C. Howe, Broad Ripple, and Washington) actually teach students grades 7-12 — it’s a model called the “community high school.” That means, as IPS officials see it, the schools face a double-whammy:  they have to meet the standards of both a middle school and a high school under Indiana’s Growth Model, which holds schools’ to targets for improving their test scores. 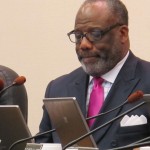 IPS superintendent Eugene White at the district's school board meeting on August 25.

“I don’t think you should be penalized because you found a model that works in the urban setting,” White told StateImpact after the meeting.

The Indiana Department of Education has argued that rural schools, which often combine middle and high school buildings, are judged by the same standards to which IPS is held.

The board vote was the nightcap of what had been a busy day in Indiana education, with state officials announcing they would turn control of four failing IPS schools and one Gary area high school to three outside “turnaround school organizations,” and assigned state-appointed help for two other underperforming IPS schools. The board authorized a lawsuit to be filed only if the state’s Board of Education approves the takeover plans at its Monday meeting.

IPS board member Andrea Roof, who voted against authorizing the legal action, said during the meeting she felt a lawsuit would be too little, too late.

“Do I think it sucks? Yes,” Roof said of the takeover. “But it’s done, in my opinion.

“It is devastating what’s happening,” Roof continued. “It’s not that I don’t think it won’t be devastating to staff, communities, families, businesses. Devastating. I wish we weren’t in this situation, but we are… My hope now, my personal hope, is for the best for our kids, whatever that may be.”