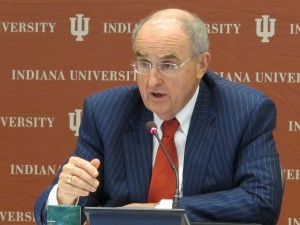 Without naming specific figures, president Michael McRobbie said Indiana University may be on pace to set records in student enrollment for the school year set to begin next week on some campuses.

“We are certainly seeing numbers that indicate, if you talk about education as a product, we have a product people want, and they are voting with their feet when they’re coming to Indiana University,” McRobbie told trustees in their regular meeting Friday.