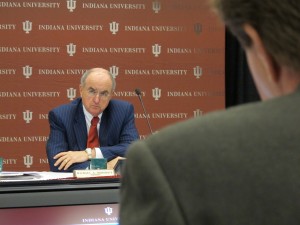 IU president Michael McRobbie listens to a presentation during the meeting of the IU Board of Trustees in Indianapolis on Thursday, August 18.

Nearly half of U.S. students factor in their on-campus dining options into their choice of where to go to college, which has turned college food services a $4.6 billion dollar industry.

It’s also made some Indiana University trustees wonder whether it’s economically feasible for the school to take part in an “amenities race” to build the nicest dining facilities and residence halls.

The Board of Trustees ultimately approved a $22 million project for a new on-campus dining hall Thursday, but trustees grilled university officials behind the plan whether the facility might be too fancy.

“We’ve tried to stay below luxury villas, but I don’t think anyone knows where this is heading,” IU trustee William Cast said in the meeting. “Where does it end, the private room? The tile shower? The sushi? If this economy doesn’t turn around, I don’t know where [amenities are] going.”

The project would add a 50,000 square-foot, 700-seat dining space in Forest Hall, complete with seven dining “venues” — each serving different types of cuisine — a coffee shop, and a “grab and go” convenience store. 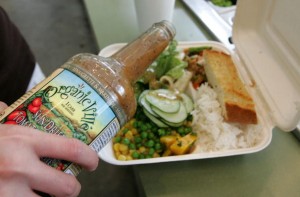 IU officials estimate the new space will have a cost-per-square-foot similar to that of a new residence hall complex Purdue University trustees approved in April, as expansive dining facilities have become central elements of selling colleges to prospective students.

Ultimately, says Rachel Warner, marketing director at the National Association of College and University Food Services, the drive to build dining halls that support a wide variety of eating options is a “response to the demand of the consumer” — the student.

“It’s not a race for amenities or to outdo everybody else. [Schools] are trying to provide an experience which students want,” Warner told StateImpact.

The trustees ultimately approved the measure because, as trustee Thomas Reilly, Jr., put it, “you’ve gotta build this thing because there’s nowhere for people to eat” in the area. There’s a new residence hall in the works in that section of campus, and there was a consensus on the board that dining options on campus are becoming too scarce.

Do you think college dining has gotten too fancy? Overly luxurious? What about student residence halls?