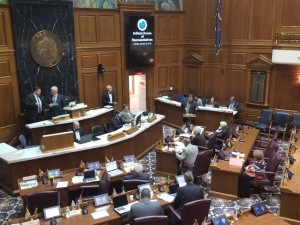 A heated debate broke out during a House committee’s discussion of a new graduation pathways bill Tuesday, as one lawmaker tried to make a big change to the legislation.

The State Board of Education passed new graduation pathway requirements late last year to help better prepare Hoosier students for a career or going to college after high school. Rep. Ed DeLaney (D-Indianapolis) took issue with the plan during discussion of a bill that would – in part – help implement those new rules. He proposed a change to get rid of them completely.

“I have the distinct impression that this thing was rolled through by the State Board of Education without the approval of the people who actually deliver the services,” DeLaney says.

But his amendment failed.

House Bill 1426, authored by House Education Committee Chair Rep. Bob Behning (R-Indianapolis), would also create a single diploma structure in the state, and students would be able to add distinctions for Core 40, Academic, or Technical Honors. Behning says it could address the disconnect between state and federal graduation rate calculations, but he, and the State Department of Education, aren’t sure the proposed new structure would receive approval at the federal level.

“There’s definitely no guarantee that the U.S. DOE will accept this plan. The one thing I think is very clear is that this proposal does not disrupt anything,” Behning says.

The bill would also create grants to help school districts fund local graduation pathways, but the source of that grant money remains unknown. The bill lists possible sources as the State Department of Education, the State Board, and the Commission for Higher Education. But Behning says as the bill evolves, that’s likely to change.

Either the ACT or SAT would take the place of end of course assessments under Behning’s bill. He says the state would likely bid on one of those exams to provide at least a first attempt for all Hoosier students. The Legislative Services Agency estimates an additional $3 million cost to the state for offering the test in the first year.

Behning’s bill would also require the State Board of Education to look into changing Core 40 math requirements. Specifically, it asks the Board to consider math courses other than Algebra 2. Behning says there should be an option for an applied math course, instead of only focusing on theoretical curriculum.

The committee ultimately voted to approve the bill, and it is expected to be heard by the House Ways and Means committee within the week.