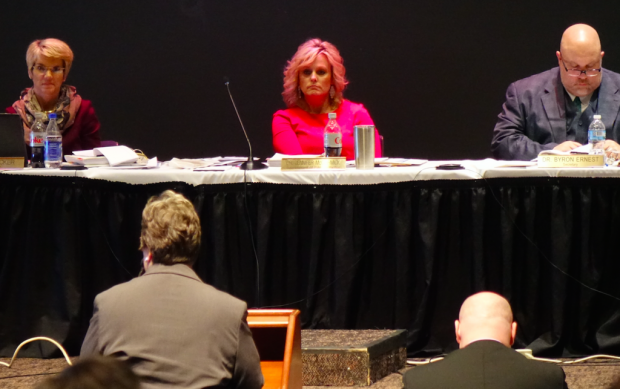 The State Board of Education approved a controversial rewrite of the high school graduation requirements Wednesday in the face of opposition from school leaders, teachers, parents and professional associations.

During nearly six hours of public comment before the vote, dozens of educators asked for more time to vet the plan since the cost and details around implementation are unknown.

Earlier, more than 200 school leaders, teachers, and officials wrote letters to the state education department raising concerns with the proposal.

Jeff Butts, Wayne Township superintendent and president of the Indiana Association of Public School Superintendents, told board members Wednesday it would be “irresponsible to approve the recommendations” without cost analysis and input from local districts.

But a majority of board members sidestepped those concerns and said that lawmakers and state officials would eventually provide adequate funding and flexibility in accountability to local school districts.

The board voted 7 to 4 to set the plan in motion for high school students beginning with the 2019 freshmen class. State schools chief Jennifer McCormick, Maryanne McMahon, Cari Whicker, and Steve Yager voted no.

Board member Tony Walker says the pathways were developed to give students better and more targeted economic opportunities.

“Almost all concerns I’ve heard about the proposal relate to the adjustments they would require from the adults and not the impact on the kids,” he wrote on Twitter during the meeting. “Education should be kids first.”

In addition to meeting high school diploma conditions, students must prove job skills and earn a credential, certificate or reach a predetermined score set by the state on a standardized test, such as the ACT, military entrance exam or earn an honors diploma.

The board’s vote also signaled a stamp of approval to end to the 10th grade ISTEP as a graduation requirement. Next month lawmaker will likely consider replacing it with a college entrance exam, such as the ACT or SAT.

The idea behind the graduation pathways is to let students choose a college or career-focused academic track. Ideally, this would allow a student to tailor their classes, extracurricular activities or internships to a particular job, joining the military or college major.

Caryl Auslander, the Indiana Chamber’s vice president of education and workforce development, said businesses want employees who have a diploma and soft skills. Auslander, who helped author the pathways, says Indiana jobs are going unfilled due to unqualified workers.

“Employers have an important stake in K-12 education,” she says. “We pay half the taxes and are the end users.”

Earlier this year the General Assembly charged the State Board of Education with creating new graduation requirements. The board’s subcommittee, led by member Byron Ernest, created the pathway recommendation after 10 public meetings totaling around 30 hours.

But some, including Butts, have questioned the committee’s transparency. The final recommendation document was seen by some members shortly before it was made public.

Board members tussled with each other Tuesday and Wednesday about what details should be hammered out now and what should be left to legislators or the future to sort out.

But board member David Freitas, who helped write the plan, argued that the proposal was never intended to answer every question.

“This is a visionary document,” Freitas said Tuesday during a hearing about the plan. “The details aren’t going to be there yet.”

Data from the state education department found nearly 10,000 students would not graduate under the proposed graduation requirements.

Other local school leaders have questioned the impact on poor and special education students to inequity for rural districts unable to take advantage of new ways for students to graduate.

Here is the current version of the recommended graduation requirements. Students graduating in 2023 must satisfy all three of the requirements by completing a pathway.