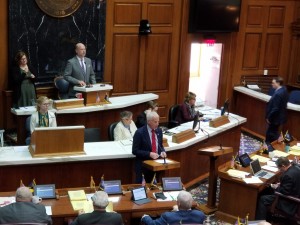 Monday marked the last day for Indiana lawmakers to move legislation out of the House of Representatives, and a handful of education measures received approval.

One of those bills, House Bill 1426, would address a change in federal graduation rate calculations. It would create a single high school diploma structure to meet those federal rules, and is a welcome solution to a problem many state and school officials have shared concern over in recent months.

The new system would allow students to add different distinctions for Core 40, technical or academic honor coursework. A change to the bill made last week would also create an alternate diploma for students with severe cognitive disabilities. House Education Committee Chair Bob Behning (R-Indianapolis) says it still fits into the federal Every Student Succeeds Act guidelines.

“Instead of getting a certificate of completion, under this they would now get a diploma – a specially designated diploma – that will count in our graduation rate,” Behning says.

No more than 1 percent of students in the state can earn an alternate diploma, per federal rules, but Behning says it could help those students find jobs if employers require them to have a high school diploma.

Another bill approved by lawmakers Monday focuses on positive discipline practices in schools. A major goal of House Bill 1421 is to reduce disproportionate rates of suspension and expulsion for low-income students and students of color. Behning says it could help keep more students in the classroom as well.

“Almost 10 percent of our students are either suspended or expelled at some time during the school year,” Behning says.

Under the bill, the State Department of Education would survey how schools already use positive discipline practices, and creates a study committee to learn more about those in elementary and middle schools.

The measures now move to the Senate for consideration.