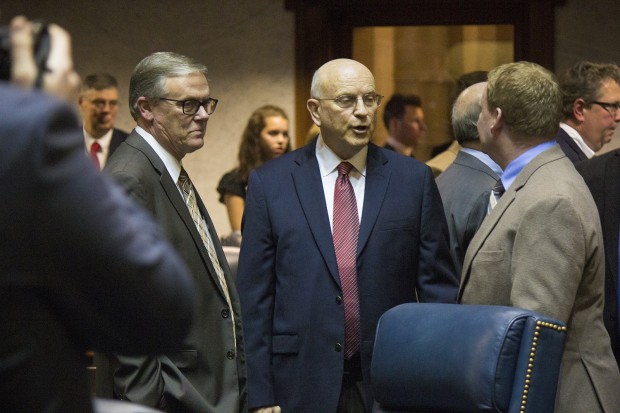 So far this year, Indiana lawmakers have been debating, tweaking and analyzing a slew of education bills that could become law. They cover a range of topics: from preschool expansion, to school funding, to prayer in school.

This week was the halfway point for this year’s legislative session, and the Senate and House each passed the bills they are advancing to the next chamber. We’ve been following along.

Here’s what you need to know:

A Modest Pre-K Expansion Advances Out Of Senate

The preschool expansion proposal would increase annual funding for the state’s current preschool pilot program, from $10 million to $13 million. It would also add $1 million for “in-home early education services.” Under current law, state funding is available for low-income children in five specific counties to attend highly rated preschools. This expansion would allow about 1,850 new children to attend elsewhere in the state.

Many Republicans, including Gov. Eric Holcomb, Democrats and business leaders wanted a larger increase. In the months leading up to Tuesday’s Senate vote, state-funded pre-K expansion enjoyed broad support from all of these groups, and Holcomb called for lawmakers to double the current pre-K funding.

Yet, the Senate appropriations committee chose its own path and cut the bill’s proposed increase, from $10 million to $3 million. On that occasion, Republican Senate Appropriations Chair Luke Kenley says he doesn’t want to expand the program more until he sees a study showing it is effective.

“All it does is alleviate the responsibility of the parent to prepare the child for education,” Kenley says.

The Indiana House passed legislation to replace the ISTEP exam starting in the 2018-19 school year.

“Make it shorter. Quicker return. End of year assessment,” he says. “A single test window. And have Hoosier educators directly involved in either creation or grading of it.”

The legislation also allows the State Board of Education to decide whether to purchase a so-called off-the-shelf exam or oversee the design of a unique test for Indiana. Lawmakers and experts have debated those choices this session.

House Republicans sent their budget to the Senate with a small increase for K-12 funding. The two-year plan calls for an increase of 1.1 percent in the first year and 1.7 percent in the second year, or a total of $273 million.

But Democrats weren’t buying it.

Rep. Gregory W. Porter (D-Indianapolis), ranking minority member on the House Ways and Means Committee, attempted to slash funding for charter schools and private school vouchers with amendments that were voted down.

“In the 25 years I have served in the Indiana General Assembly, I don’t think I’ve seen a proposed state budget that drew less attention or interest than the one that just passed the Indiana House,” Porter said in a statement.

The budget calls for a $10 million increase to the state-funded On My Way PreK pilot program. It passed on a 68-29 vote. Read more here.

Bipartisan support of House Bill 1024, an effort supporters say will “put prayer back in school,” moved this legislation from House to Senate with ease.

Rep. John Bartlett (D-Indianapolis) says the legislation won’t require students to pray in school,  but it does spell out rights to pray and express religious beliefs through clothing and school assignments.

But others say a focus on expressing religion could single out those who are not religious or follow a different faith than the majority of students at a school.

“You better appropriate several hundred thousand dollars to defend this statute if it is passed,” Indianapolis attorney Morris Klapper said during a committee debate.

A group of bills aiming to protect students from teacher and staff sexual misconduct have advanced. One would require schools background check teachers every five years. A separate bill would require districts check references before hiring. And another would require courts to notify schools when educators are involved in misconduct cases. The bills have received bipartisan support.

If House Speaker Brian Bosma has his way, Indiana will no longer be one of the 13 states that elects their state superintendents.

During the past two months, Bosma has passionately called for the Superintendent of Public Instruction to become a position appointed by the governor. The office should not be political, he says, and the governor and superintendent should share the same vision.

Lawmaker debate recounted friction from the last four years – when Democrat Superintendent Glenda Ritz clashed repeatedly with Republican Gov. Mike Pence and the Republican-appointed members of the State Board of Education.

“The state of Indiana and our kids and our schools are better off if we make sure that never happens again,” says Senate President Pro Tem David Long (R-Fort Wayne).

But lawmakers from both parties are concerned that an appointment could lead to instability at the Department of Education.

Those concerns swayed enough in the Senate to kill the bill. But an almost identical bipartisan House proposal was approved and sent to the Senate.

A Senate rule says a bill similar in language to a defeated bill may not be heard again in that chamber. Yet House Speaker Brian Bosma (R-Indianapolis) says there are ways to get it done.

“Both chambers have passed important legislation that the other chamber has decisively defeated,” he said before the 68-29 House vote to approve HB 1005. “Somehow, someway in the final recipe, the cauldron that becomes state policy at the end of the session, occasionally, some of those items come back together.”