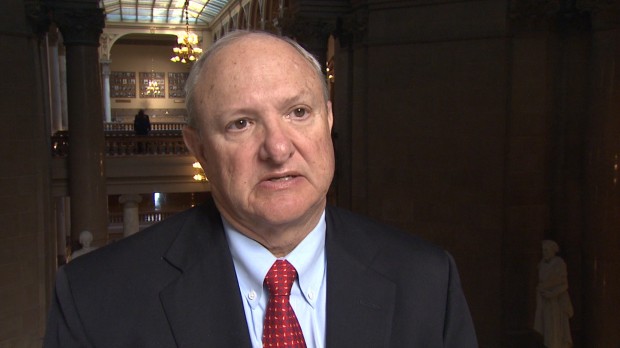 A Senate committee voted Thursday to reduce the amount of additional money given to state-funded preschool. Democrats and many Republicans, including Gov. Eric Holcomb, advocated for a $10 million increase, but an amendment written by Senate Appropriations Chair Luke Kenley, R-Noblesville, reduces the increase for On My Way Pre-K to $3 million.

Kenley’s amendment, passed by the appropriations committee 12-1, dramatically reduces the money to expand state-funded pre-K education, and it allocates money to a preschool program that would be taught at home. Kenley says the program is “not homeschooling.”

Holcomb asked the legislature for a $10 million a year increase to On My Way Pre-K before the session started, but Kenley says he doesn’t want to expand the program significantly until a longitudinal study measures success.

“All it does is alleviate the responsibility of the parent to prepare the child for education,” Kenley says.

The amendment also allocates $1 million to provide assistance for people who are homeschooling a preschool-aged child.

In a statement released after the appropriations committee reduced the governor’s plan, Holcomb’s spokesperson, Stephanie Wilson, underlined his commitment to state-funded pre-K expansion.

“It’s a key component of the governor’s legislative agenda and one that will contribute directly to the state’s efforts to build a 21st century skilled and ready workforce by ensuring Hoosier students have a strong beginning to their education,” Wilson said.

When the state launched On My Pre-K in 2015, Indiana became one of the last states to have a state-funded preschool program. The pre-K pilot program gives scholarships to low-income families to attend an already established, high quality preschool.

But Indiana still offers far fewer education services for low-income preschools than most states in the country: The pilot is small, serving about 3,700 students in the three years since its launch.

But Kenley says the state does supports its preschoolers.

“There’s already $400 million a year that’s being spent on programs for kids under the age of 5, including the fact that 37 school corporations have a full pre-K program,” Kenley says.

But many of these pre-K programs aren’t free. Almost all school districts charge tuition until a child reaches K-12.

This bill, with the amendment, must pass the full Senate by Tuesday, the deadline for the first half of the session. If the full Senate passes it, it heads to the House for consideration.