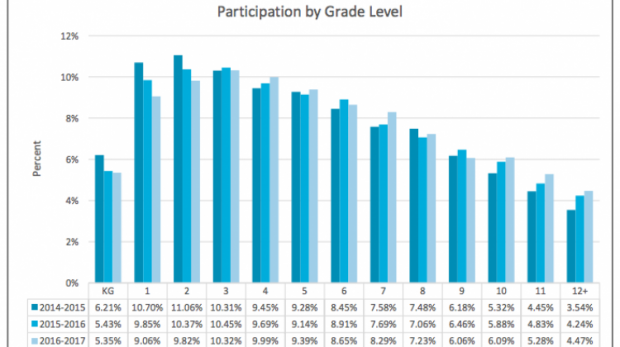 For the first time the number of Hoosier students using publicly-funded vouchers to attend a private school reached 3 percent of statewide enrollment, according to a new report.

Indiana’s Choice Scholarship Program hit a record 34,299 students this academic year using the controversial tuition support but the overall growth of the program appears to be slowing down.

The Choice Scholarship Report, released by the Indiana Department of Education, also shows only a 5 percent increase of new students in the program for the 2016-17 school year compared to 2015-16.

This year’s count of students in the program is an increase of 776 percent percent since when it began in the 2011-12 school year. Initially, only poor families who previously attended a public school – or were using a tax credit scholarship – qualified to use vouchers to pay tuition at a private or religious school.

But a broadening of eligibility requirements in recent years by the Republican-dominated General Assembly allowed many more students to attend. Such as, income requirements expanded to 200 percent of the amount to qualify for the federal free or reduced lunch program.

Families can qualify for the program by meeting the requirements of seven pathways.

According to the report: