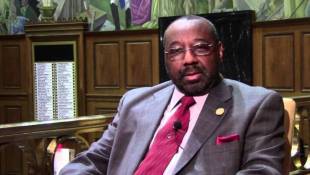 Rep. John Bartlett, D-Indianapolis, authored House Bill 1024 to prevent discrimination against a student on the basis of a religious viewpoint or religious expression in a public school. (photo credit: Indiana House Democrats)

Could more prayer in school be a cure for societal ills?

Rep. John Bartlett, D-Indianapolis, says it can. His legislation, House Bill 1024, would prevent discrimination of students who pray in school or express their religious beliefs, such as through clothing, jewelry or writing.

“What this bill does is provide religious education for high school students and allows children to pray and pray out loud in school,” Bartlett said Monday during a House Education Committee hearing. “It is not mandatory, but it gives you the opportunity to pray.”

The bill passed the House Education Committee 10-2 Tuesday and now heads to the full House.

If made into law, schools would have to provide opportunity for students to express their own religious beliefs during events where other students are speaking. The Department of Education and state attorney would be required to provide a “model policy” on these issues for schools to adopt.

An amendment added to the bill also allows principals to prohibit religious expression if it’s “contrary to citizenship or moral instruction.”

Several Indianapolis pastors spoke in favor of the legislation Monday during the first part of the hearing. Students are being dragged down by poverty, gun violence and prescription drug abuse, they said, but prayer can help them see a way out.

Rev. Wayne Moore, pastor of Olivet Missionary Baptist Church, said he was appealing to the lawmakers’ conscious to approve the bill. As a child, Moore said, he was buoyed by the religion he was taught in school, including learning how to pray.

“A lot of our foundations are literally crumbling,” he said. “We have lost our principals and morals in political decisions.”

But David Sklar, government affairs director with the Jewish Community Relations Council, spoke against the bill. The organization, he said, has heard very few concerns about religious accommodations in public schools.

“That tells us the status quo is working,” he said, later adding: “We believe as a community that prayer is taught in our religious institutions. It is up to us as parents to make sure that our students, our children, receive that religious education as we see fit.”

Sklar and others questioned whether the bill was needed at all. Students are already allowed to organize their own religious groups at schools and pray inside a school, standards set by court cases.

Indianapolis attorney Morris Klapper, who is Jewish, fears the legislation could lead to children singled out for their beliefs. As a child, he said, he was harassed by teachers because of his religion.

Klapper tussled with Republican Rep. Tim Wesco, a Baptist minister, over the legality of the bill and whether it could led to schools promoting one religion over another.

“You better appropriate several hundred thousands dollars to defend this statute if it is passed,” Klapper said during testimony.

Wesco, who was seated near the public comment podium, turned around to face Klapper.

The one student to testify was Carmel High School senior Mary Carmen Zakrajsek. Her club — Carmel Teens For Life — almost took part in a lawsuit against the school district recently over alleged censorship.

In November, a poster by the group was removed from a wall in the high school. The school said the poster did not meet signage guidelines nor was granted approval by the administration.

But Zakrajsek told lawmakers that the group’s anti-abortion stance was the true reason.

“Student’s voices are being silenced and it’s time to take a stand — for what is right,” she said, adding that the bill would protect students’ ideological beliefs.

After Zakrajsek testified, Moore asked those in the room to applaud her. They did.

The committee approved a bill amendment that would make it optional for school corporations to offer an elective course in religion, such as the historical or cultural study of religion. Bartlett wanted it to be a requirement.

On Tuesday, another amendment was approved that allows school administrators to prohibit religious expression if it’s “contrary to citizenship or moral instruction.”

Democrat Rep. Vernon Smith of Gary supports the bill and said those religious limits are needed.

“There’s a lot of crazy stuff out there now,” he said without being specific. “We need to try and make sure that does not enter into our schools as well.”

But Democrat Rep. Ed DeLaney of Indianapolis said he’s heard no evidence that prayer is constrained in schools during two days of testimony.  If this bill becomes law, he said, students of all religions will wind up offended and possibly suing the state.

“You destroy prayer by having the state behind it,” he said. “That’s what this bill does.”

A second reading for the bill has not yet been scheduled.