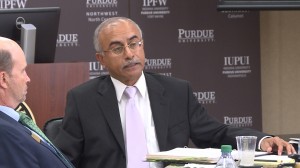 For instructors working in the world of higher education, tenure is the ultimate goal.

It’s a prestigious level of job security because to qualify, professors have to meet criteria that often take years to reach.

The Purdue University Board of Trustees Friday approved updates to its promotion and tenure policy that would require tenured professors to spend more time mentoring students. The Trustees view the updates as huge strides, even though most Purdue faculty think they’re unnecessary.

The process of updating Purdue’s tenure policy started a few years ago when a number of graduates expressed through a survey that they wanted more of a connection with their teachers.

That sentiment was so overwhelming that it compelled the Board of Trustees to bring it to the Provost of Academic Affairs, Deba Dutta.

“One of the things that they wanted is to make sure faculty understand mentoring of students is very important that they must do so,” Dutta says. “They wanted me to look at the faculty involvement and encouragement of undergraduate research to give them opportunities to do research guided by faculty.”

The board also wanted to encourage tenured professors to find innovative ways to teach and create new practices for instruction.

They were able to address all of these concerns in an updated policy that they passed Friday – but not without some faculty pushback first.

How Do You Enforce Mentorship?

Biological Sciences professor David Sanders says he felt insulted by the language requiring professors to mentor students, because it implies faculty are currently not doing so.

“I fully believe in mentorship,” Sanders says. “I mentor undergraduate researchers all the time. It’s very competitive in fact to get into my lab to become mentored by me, and I’m very proud about what I’m able to achieve with them.”

But Dutta says the language wasn’t intended to necessarily fix a problem. He believes most Purdue faculty already prioritize mentoring their undergraduate students – he just wanted the words put to paper.

“It puts it in the policy document and makes a statement to the rest of the world and the student body right now that this is an institution where faculty pay attention to the success of the student, it just makes that statement,” Dutta says.

The language for the mentorship requirement states that a professor must show “commitment to active and responsive mentorship, as well as an active role in mentoring, advising and supporting the academic success of students.”

“It makes a statement to the rest of the world and the student body right now that this is an institution where faculty pay attention to the success of the student, it just makes that statement.”
—Deba Dutta, Provost of Academic Affairs, Purdue University

That’s language that Sanders says is way too vague to be effective.

Board of Trustees chair Mike Berghoff says the Trustees aren’t mandating specific actions in terms of mentorship, including students in research or improving teaching practices.

“All we cared about was making sure that if somebody was being considered, the needle wasn’t on zero, on any of those three areas,” he says.

Purdue faculty made many revisions that are reflected in the final version of the tenure policy. For example, they shared concerns that not all faculty are involved in research or other collaborative projects in which to include students, and they didn’t want that to be a barrier to receiving tenure.

And the Trustees listened. Berghoff says faculty input was crucial to create a realistic policy.

“I’m also appreciative of the faculty’s help,” Berghoff says. “I know there was some thinking that we were discouraged by red lining and removal, not at all, it really made the process better.”

Dutta says it’s been more than 30 years since the university updated this promotion and tenure policy, and he is pleased with the changes the faculty and Trustees came up with. In fact, he says he wants to revisit the document every five years to make any necessary updates.

But Professor Sanders says that’s not a logical way to attract the best talent.

“There are people who are starting now under one set of rules and you are going to change the criteria on them in the middle?” he says. “To be changing them so much really doesn’t sound like a way that’s going to be attractive to people who want to come to Purdue. It’s not a good recruitment tool if we’re constantly changing the criteria.”

The new policy takes effect January 1, 2016 and will apply to all future educators going through the tenure process.