Indiana’s State Board of Education will address two of the most controversial education-related topics during their monthly meeting Wednesday: charter schools and standardized testing.

That’s because the state has continued to see issues related to both of these divisive subjects.

Multiple inquiries about charters’ 2015 Title I allocations during last month’s meeting prompted further examination of the Indiana Department of Education’s Title I funding assignment process in the following weeks. The U.S. Department of Education weighed in, saying the IDOE had been making calculations incorrectly and would likely have to take action to remedy their mistakes. 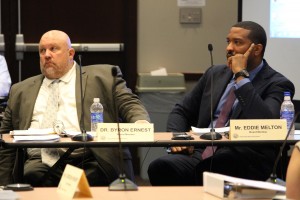 The board will discuss the situation Wednesday, most likely receiving an update from state Superintendent Glenda Ritz, whose staff is working to provide the feds with Title I data dating all the way back to 2010.

The group will also take action on two charter-specific funding programs approved as part of the General Assembly‘s 2015 budget.

Back in August, the board approved eligibility requirements and application processes for the Charter and Innovation Network School grant program – which acts as a sort of property tax replacement for charters, who are not eligible for local tax dollars – and the Charter and Innovation School Advance Program, which allows those schools to apply for a loan from the state’s Common School Fund.

Read more specifics about the grant and loan programs here.

On Wednesday the board will decide whether to approve specific recommendations for schools that have applied for grants. They will also decide how much money to set aside for new charters applying for loans during the 2016-17 school year – board staff recommend that amount be set at $10 million.

The ever-evolving statewide ISTEP+ test will also demand much of the board’s attention this month.

The process of releasing 2015 ISTEP+ scores has been delayed following an announcement from outgoing test vendor CTB that graders had encountered technological problems. CTB President Ellen Haley relayed this news in August, informing the board that meant they would not receive individual student scores until October.

They now have that information, and will be able to set cut scores – the score that determines passing or failing – on Wednesday.

Chalkbeat Indiana’s Shaina Cavazos did the math and found that IDOE staff – along with technical advisors – have set expected pass rates lower than actual pass rates from 2014 for both the English and math portions of the test – 16 and 24 percentage points lower, respectively:

The biggest swings in passing rates would be in math. Almost 82 percent of eighth-graders passed in 2014, but about 52 percent would pass in 2015 if the board approves the recommended scores. Seventh-graders would also face an almost 30 percentage point drop. The highest percent of students passing math would be 66.5 percent in fifth-grade.

In English, passing rates would drop by as  much as 18.8 percentage points for fifth-graders, for whom 62.7 percent would pass in 2015 compared to 89.3 percent in 2014 based on the recommendations. The highest passing rate for 2015 English would be for third-graders at 70.9 percent passing.

But IDOE spokesman Daniel Altman says it’s not fair to compare last year’s results to this year’s results because the two tests were based on two separate sets of standards. Last school year marked the first time Indiana educators taught the state-specific Indiana Academic Standards – instead of the Common Core – in their classrooms.

“Where it becomes a problem is we’re currently operating under the old A-F accountability system, and that system treats this year’s results like it treated last year’s,” Altman explains. “It’s treating them like apples to apples, even though they really aren’t.”

The feds have offered states who are adopting new standards the option to pause accountability measures linked to test scores. Indiana’s attorney general said earlier this year that state law prohibits the state from pursuing this option, but Altman says its something Superintendent Ritz and her staff want to continue discussing.

If the board approves these cut scores, CTB will issue final reports next. If everything goes according to plan, schools should know how their students performed by December.

As has become customary, the board will also receive an update on the state’s transition between standardized testing providers. British company Pearson takes over administration of the test from CTB this year, and the IDOE has tried to keep the board abreast of their progress.

The board meets Wednesday at the statehouse in Indianapolis. You can watch the meeting live beginning at 9 a.m.

Ritz will also lead a second, special board meeting on October 28 to discuss changes to Indiana’s high school diploma requirements.