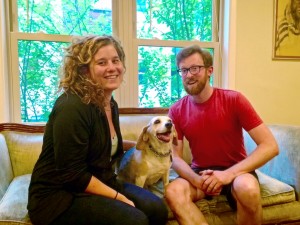 Mallory Rickbeil and her boyfriend Chris Stearly want to buy a home, but Rickbeil’s student debt is preventing them from moving forward with that decision. (Photo Credit: Claire McInerny/StateImpact Indiana)

The path to a college education has gotten pretty complicated.

The American job force is increasingly demanding a college degree, and at the same time it’s becoming more and more unaffordable to get one. Tuition is increasing and grants and financial assistance aren’t keeping pace. Young people are taking out thousands of dollars to get just a bachelor’s degree, and as we’ve reported, Indiana has one of the highest rates of college graduates defaulting on their student loans.

With the millennial generation carrying more student loan debt than any other, what does this do to the overall economy, as millennials move toward marriage and home buying? How will their habits change the landscape of higher education?

Mallory Rickbeil and Chris Stearly just moved into a new house in Bloomington. This is the second place they’re renting together, and it’s an upgrade from their previous home.

“There’s so much space,” Rickbeil says. “Chris and I were looking around being like, ‘we have too much space.’”

Roominess aside, the new house has one huge flaw: it’s not theirs.

“Chris and I have the same objective of wanting to have a house that we own, and at this point Chris is much more capable of doing that than I am – in a large part because of my student loans,” Rickbeil says.

Rickbeil owes thousands of dollars in student loan debt for a master’s degree she finished three years ago. She pays around $500 a month, which makes it tricky to make ends meet, let alone save for a house, something she and Chris are ready to do.

“If Chris and I were to buy a house, it would put more of the burden on him for making the down payment,” she says.

In the 1960s, more than half of people ages 18 to 31 were married and living in a home they owned. Today, only 23 percent of people in the same age group are in that situation. We’ve seen huge spikes in renting homes over purchasing, and in Indiana, 27 percent of millennials live with a parent, the highest that number has ever been in the state.

With so much of millennials’ budgets going toward paying off student debt, the overall economy is changing.

“Millennials actually don’t invest as much in the market, because they’re concerned about when it went down,” says Tim Bowman, a certified financial planner and a millennial himself.

Bowman says it’s still better in today’s job market to have a degree, but all of this debt and the large number of millennials entangled in it might change that for future generations.

“I think education – my belief, which is an optimistic perspective – I think it’s going to become more cost effective over time because the market will demand it,” Bowman says.

But until the current system of funding higher education changes, millennials like Rickbeill and Stearly will have to navigate their financial decisions with student debt as a factor.

The couple says they won’t let Rickbeil’s debt influence other decisions such as marriage, but she would prefer to have a handle on her debt before moving in that direction.

“I feel like a very weak link in that chain, and finances are such an important part of making a relationship,” Rickbeil says. “Making it fit the needs of both of the people who are in it – it’s something I think about a lot.”

How Will This Generation’s Debt Change The Landscape?

If there’s a silver lining, perhaps it’s this: Bowman says millennials are saving more than their parents, in part because they don’t want to see their kids face the same kind of troubles associated with student debt that they’re experiencing.

Ann Kayser, a 25-year-old living in Indianapolis, is a perfect example of that.

Kayser has almost $50,000 in debt from her undergraduate and master’s degree, and says her debt isn’t just a concern for her own financial future.

“I actually have a niece that just turned one and I worry about what she’s going to have to go through,” Kayser says.

And Kayser says that has her considering whether for her niece’s next birthday she could just give her money to start a college fund rather than a toy that she’ll quickly outgrow.

Bowman says that sentiment is very common with the millennial couples he advises, many of them choosing to start a college fund for their kid before saving for a down payment on a house.