State Superintendent Glenda Ritz announced Friday she is dropping out of the race for governor just a couple of months after kicking off her campaign.

Ritz says she’ll instead focus on seeking reelection to her current post.

The school chief’s gubernatorial campaign has been beset by problems since its start only two months ago, from an apparent lack of campaign staff to extremely poor fundraising totals, as well as questions about the legality of some campaign contributions. 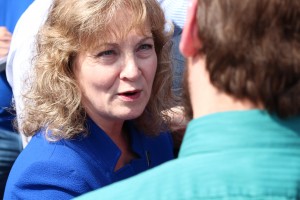 Ritz says while the state needs a new governor, now isn’t the time for her to run.  She says her work as superintendent isn’t finished and pledges to dedicate herself to students, educators and families.

“Under my leadership, I have brought the discussion of public education into the public discourse and have started to fundamentally change how we support schools,” Ritz said in a statement. “My work is not finished, and my passion is stronger than ever. I must continue to be 110 percent engaged in supporting public education.”

“I will continue to advocate for what is right to educate our children to improve our economy for all Hoosiers,” Ritz continues. “With the help of all of you, we will keep education the focal point of the gubernatorial race.”

“Glenda Ritz has always put the best interests of our school children first and this decision is another example of that,” said former House Speaker John Gregg, one of Ritz’s former opponents in the Democratic race, in a statement. “I look forward to supporting her re-election to the office of Superintendent and to working with her as Governor to further strengthen public education in our state.”

“Superintendent Ritz has been a champion for students, parents, and educators and I know that she will continue her outstanding work to ensure all Hoosier students have access to a high-quality education in our state,” Tallian said in a statement.

State Democratic Party Chair John Zody says he understands and respects Ritz’s decision, noting Hoosier families can still have confidence in her leadership at the Statehouse.