In politics, as in life, there are good days and there are bad days.

As of late, nobody knows this better than gubernatorial candidate and current state superintendent Glenda Ritz.

Following allegations last week that Ritz’s campaign may have violated some election finance laws, the candidate and her team are now in clean up mode – but progress has been slow. To make matters more complicated, Ritz lags far behind her opponents in campaign funding.

Can the superintendent regain her footing in the race before it’s too late?

Glenda Ritz had a rough go of it last week.

Reports surfaced late Thursday that financial documents submitted to the state showed the superintendent’s gubernatorial campaign accepted donations during the 2015 legislative session –something prohibited by state law, which defines the session as a sort of “blackout period.” Ritz has since claimed this was a recording error, along with submitting an amended finance report to the state Elections Division. 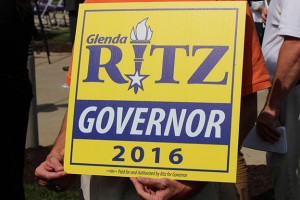 A supporter holds his sign supporting state superintendent Glenda Ritz during her announcement she will run for governor in 2016. (Photo Credit: Rachel Morello/StateImpact Indiana)

Andrew Downs, a political analyst and director of the Mike Downs Center for Indiana Politics at IPFW, says this is the sort of violation that doesn’t get made very often, which reflects poorly on the campaign.

“This seems to be a fairly large mistake, and in reality, something that might just be referred to as ignorance of the law,” Downs says. “It’s the sort of thing that you want to make sure you’re getting right – and this, obviously, looks like they’re not getting it right.”

What’s more, Downs adds that the snafu is an indicator that at the moment, Ritz’s campaign is not as well-oiled as it could be.

“These can snowball, they can build on one another and create an even greater image that the campaign is not up and running,” Downs says.

The incident also illustrated a dire need for one of the most crucial elements of running an effective campaign: communication.

Naturally, once media outlets uncovered the questionable data in Ritz’s financial report last week, they had questions. But up until that point, many in Indiana’s statehouse press corps were unaware who they could turn to – it was only after events transpired last week that the campaign widely identified the name and information for the campaign’s designated press contact. 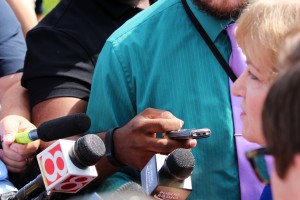 “There’s a big difference between trying to control the message and not being able to respond,” Downs says. “The Ritz campaign really appears to be in that really not able to respond category.”

And, Downs adds, that’s one reason why campaign funds matter.

“You don’t need to have the most money to win an election, but you do have to have enough money – ‘enough money’ means having people who are able to respond quickly to media requests, respond quickly to requests for the candidate to appear different places, to have handout and mailers and other form of voter communication that enable you to have a message consistently delivered to voters and to potential supporters,” Downs says. “Without the money it’s very hard to do those things.”

Looking at the Ritz campaign’s financial statements, it may become a bit clearer why they’re having these issues.

The campaign’s fundraising totals to date appear less than stellar. Ritz has only raised about $30,000 – which is more than fellow Democrat Sen. Karen Tallian, who only brought in about $23,000, but well behind Democratic challenger John Gregg and incumbent Republican Gov. Mike Pence, who each have war chests well over $1.5 million.

“In spite of the violation, you still don’t have a lot of money raised,” Downs explains. “The amount of money that was raised was really not quite what a lot of people would expect to be raised in, granted, a short period of time – but a period of time for a candidate with the sort of broad name recognition she has and the broad base of supporters she has out there.”

Which begs the question: how much does money really matter?

According to Ed Feigenbaum, another political analyst and editor of Indiana Legislative Insight, the answer is quite a bit.

“Money is everything. Money is something in reality and money is also something in terms of perception,” Feigenbaum explains. “You’ve got to be able to show that you can raise money in order to continue to get money and to be a credible candidate.”

But this isn’t exactly uncharted territory for Ritz. She has experience running a campaign with very little money, and a successful one at that.

Back in 2012, when Ritz challenged incumbent Tony Bennett for the state superintendent post, Bennett out-fundraised her by $1 million. Nearly half of Ritz’s campaign contributions came in the amount of $25. Nine out of ten donations were $100 or less.

But Ritz made every penny count, and she sounded calm and confident just months before the election as she explained her strategy to StateImpact.

“Money is something in reality and money is also something in terms of perception.”
—Ed Feigenbaum, Political analyst, Indiana Legislative Insight

“I am not worried about funding for this campaign,” Ritz said in August 2012. “I have a good grassroots campaign. At the end of the day, it’s about who shows up at the polls.”

Feigenbaum agrees that back then Ritz had a great deal of support from teachers outside of financial donations.

“She was able to win that race in a way that nobody else had been able to capitalize on in Indiana politics to that point,” Feigenbaum recounts. “It was really the social media thing, being the first person to really milk Facebook in order to get something out of it politically, and to be able to mobilize her teacher network.”

Most would agree Ritz showed that a good base of volunteers can make a big difference. But this go-around she’s entered a different race – arguably, a much bigger race – so there’s a case to be made for the impact money can have.

“In 2012, I think a lot of people would agree that some of her support was not necessarily support for her, but opposition to Tony Bennett,” Downs says. “There’s no vote against somebody here, and that’s a problem for the campaign. That typically is overcome by having the resources to campaign effectively throughout the state, and in this case that means not only volunteers but also dollars.”

Plenty of the same people – mainly teachers – who drove Ritz to victory back then say they’re still behind her now.

Over and over, for at least a year now, I’ve heard supporters of the state’s superintendent of public instruction say that they not only wanted her to run for governor, but that the state needed her to run for governor. Many of these supporters have been teachers, of course, and they are a particularly potent political force because of the way so many of us (as friends, neighbors, relatives or school parents) listen to them. […]

…[I]t’s clear that she has a deep bond with a solid base of supporters who are upset with state education policies, often for valid reasons. It’s clear that her fights with Pence and other Republicans have left her looking, in the eyes of many, as a courageous fighter…And it’s clear she has the kind of motivated base, however big it really is, that Pence and Gregg would love.

Despite lagging behind on her financial statements, it appears the superintendent can still rally the same kind of support to potentially carry her through the primary and onto the general election. But, Feigenbaum says, that all depends on controlling her message.

“There are all kinds of key questions, as we see in every legislative session, where the governor has to weigh in,” Feigenbaum says. “We don’t even know to what extent she believes we should be maintaining a budget surplus. We don’t know where she stands on a balanced budget amendment. We don’t know where she stands on expansion of gaming. She’s not had to address those kinds of things yet, and that’s where the campaign will be focused.”

And, once again, that’s where money comes in.

“In order to be able to get to the point where you’re talking about the issues, you have to have the money to be able to communicate your position on the issues,” Feigenbaum continues. “In order to get to that point, you’ve got to pass what we call the ‘money primary.’ That’s why it was so important to look at the first set of [campaign finance] reports, to see who’s actually going to be competitive.”

In order to maintain control of her message, Andrew Downs says Ritz’s team needs to really establish a functional campaign infrastructure so they can respond to questions or crises in a timely manner. That, he says, is what will determine the future of the “Ritz for Governor” campaign.

“This all looks bad right now, but it’s still July,” Downs says. “If the campaign is able to show that it responded in a good way and to suddenly perform above expectations, then this is the sort of issue that can be forgotten and go away. If it takes longer than that, then we might be talking about something that is a deeper or longer, greater problem.”

As for Ritz’s campaign finance debacle, sources at the Indiana Election Division say the office has yet to receive a complaint about the matter. If it does that could lead to another round of scrutiny, a lengthy investigation and plenty of opposition to her candidacy – another test for the superintendent and her team.