Gov. Mike Pence promised to expand opportunities for charter schools in a speech today at the conference of a private charter school company.

Pence praised the work of teachers at the event and lauded the growth of charter schools in the state. Pence said 22 new charters will open in the next three years bringing the total to 86 in Indiana — a 43 percent increase since 2011. 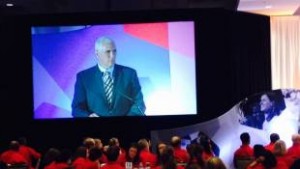 “We want to eliminate low income and location as barriers to receiving a quality education and public charter schools are an essential element of achievement that objective,” he said.

Pence also touted a new grant program that provides an additional $500 in per student funding for charter schools rated A-to-C and $50 million in construction loans.

He had sought a $1,500 per charter school pupil increase in the 2016-2017 biennial budget but some lawmakers questioned the success of charter schools and supported the grant program instead.

Critics of charter schools say the redirection of funds from traditional public schools negatively impacts districts and performance at a charter is no better than public schools. Five charters schools have been closed in Marion County in the past year due to academic failures.

Supporters say charter schools can innovate — such as extend the school day or week — and quickly alter curriculum to improve student achievement because they operate outside of teacher union contracts.

Yet national charter school companies have said they are unlikely to expand to Indiana because other states offer more financial support.

“I promise we are going to work our hearts out with members of the general assembly of both parties to make sure Indiana remains a state committed to educational achievement and excellence including expanding opportunities for charter schools — so help me God,” Pence said.

The Republican governor spoke at the Charter Schools USA annual summit held at the The Weston hotel Downtown. The Florida-based company operates three former Indianapolis public schools that were taken over by the state in 2012 after six consecutive years of F grades and will manage two additional charter schools.

Indianapolis Public Schools and CSUSA have agreed for the company to operate a K-6 “feeder school” at Emma Donnan Middle starting Aug. 3.

Jon Hage, CSUSA president, said that will allow elementary students to be on track academically when they enter middle school.

“We think the turnaround process needs to start earlier because those students didn’t fail in middle school, it was much earlier,” he said.

Hage has raised concerns over the state’s funding of charter schools in the past. Even earlier this year he was unsure whether the company would seek to open a non-takeover charter school in Indiana.

He said the new CUSA schools will run a on a “very, very, very tight” budget because lawmakers did not approve the $1,500 per-student funding increase that would equalize state support of traditional public schools and charters.

“We hope the legislature will continue to look at that funding gap,” he said. “Indiana has made a step in the right direction but there will need to be several more steps to attract the kind of national teams and organizations to be able invest long-term in Indiana.”

Recently, two new schools that will be managed by Charter Schools USA schools were approved by the Indiana Charter School Board to open in Indianapolis and Clarksville.