Schools are preparing to open their doors to students in the next couple of weeks – and for a few of them, success in the coming year is crucial to staying afloat.

The State Board of Education has scheduled community meetings for three public schools in danger of being labeled as “failing”: West Side Leadership Academy, a high school in the Gary Community School Corporation, and Caze Elementary and Washington Middle School, both part of the Evansville Vanderburgh School Corporation.

Each of these schools received five consecutive ‘D’ or ‘F’ grades on the state’s accountability scale as of 2014. According to state law, the SBOE is required to host public hearings at any school that reaches this point.

All state board members are invited to attend, along with school and community leaders, to toss around ideas for improving school performance. New board member Eddie Melton, who represents Gary along with the rest of the 1st Congressional District, says these conversations are crucial to help him and his colleagues do what’s right for the school and for the community.

“Successful schools are a key building block to successful neighborhoods and communities,” Melton said in a statement. 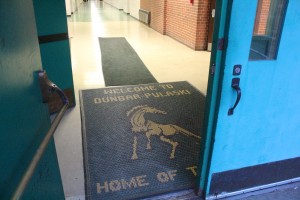 Doors already closed on one failing school in Gary when the State Board of Education voted to close Dunbar-Pulaski Middle School this past March. (Photo Credit: Rachel Morello/StateImpact Indiana)

Melton’s district in particular does not have a stellar track record when it comes to failing schools. West Side is one of nine GCSC schools that received either a ‘D’ or ‘F’ grade last year. The school had a 7.3 percent pass rate on the 2014 ISTEP+ exam; the district’s rate wasn’t that much better at only 47.7 percent. On top of those statistics, the district has struggled with debt and other financial issues for years.

And district precedent for recent state board intervention isn’t too promising, either. The board voted this spring to close Dunbar-Pulaski Academic & Career Academy, the first time in the group’s history that members had voted to close a school without first attempting an intervention strategy.

Caze and Washington are also part of a group of nine schools in EVSC that received failing grades in 2014 – their pass rates on the 2014 ISTEP+ sat at 39.2 percent and 47.3 percent, respectively (EVSC as a whole saw 67.1 percent of students pass both the ELA and math portions of the exam). But as far as turnaround goes, Evansville is on a different playing field than Gary.

In recent months, state board members have touted Evansville as an example of a district implementing successful turnaround efforts, specifically in reference to a “transformation zone” model in place at Glenwood Leadership Academy. The district has a designated office for turnaround, headed by Director of School Transformation Kelsey Wright.

“The reason our office was created was because, in the past, you didn’t have a hearing until year five,” Wright explains. “We had schools that were hitting the three-year mark and looking forward, we knew that it might continue to happen if we didn’t do something about it. We didn’t want to wait until it was too late.”

Wright says it’s that proactive attitude that has brought so much success to the three schools that have already had turnaround hearings with SBOE members in the past, and adds that the SBOE and the Indiana Department of Education have really allowed the district to mend its schools’ issues from within.

“In the past they have supported our efforts because they believe, just as we believe, that here locally we have decided to roll up our sleeves and work alongside these leaders, teachers, and community members to turn these schools around,” Wright says. “We’re asking for that same continued support when we’re going into this with Caze and Washington.”

Meeting details are as follows:

If a school receives a sixth ‘D’ or ‘F,’ they could be subject to state intervention – so the next round of A-F grades assigned to these schools are critical. But, it may be awhile before the state board finalizes those grades.

Last month, state officials recommended changing the procedure for A-F grades for 2014-15, since Hoosier schools had to adjust to new academic standards and an updated ISTEP+ to match. Indiana Department of Education staff recommends an option it calls “Hold Harmless,” which would assign each school the better A-F grade received between the 2013-14 and 2014-15 school years.

The SBOE is still in the process of discussing potential options.