Whether you’re the starting quarterback or the benchwarmer on the basketball team, you learn lessons in athletics that you can’t learn anywhere else. But what if you’re not even given the chance to be on the team? 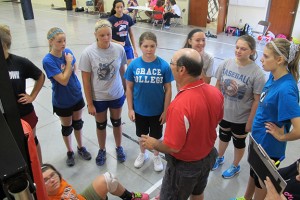 Last week we reported on academic regulations for homeschoolers in Indiana. In contrast to the state’s arguably lax rules for curriculum and testing, the guidelines for homeschooler participation in extracurricular activities is more restrictive than one might think.

Special subjects such as art, music or foreign language – and extracurricular activities such as sports or theater – are part of the regular school week for most students. Many homeschool families elect to supplement their everyday curriculum with courses like these in an attempt to make the school experience more “normal” for their students. But not every organization is 100 percent open to having homeschooled kids participate.

Bobby Cox is the Indiana High School Athletic Association, or IHSAA Commissioner. His organization spells out a number of minimum benchmarks homeschool students must meet in order to get involved with athletic teams at their local public high school.

“For the homeschool child to achieve eligibility at any of our public member schools, they have to meet all the academic requirements that the enrolled student has to meet,” Cox says.

The IHSAA represents 410 member schools, only 48 of which are private, charter or parochial schools. Homeschool students are only eligible to participate at public schools within the IHSAA that serve their area of residence — as long as they:

Yes, you read that right – homeschooled students, who are not required by state law to take standardized tests, have to take those tests if they want to compete on public school teams.

“We want to make sure that those students are subjected academically to similar conditions that our enrolled students are,” Cox explains. “We don’t want to have a varied playing field whereby a homeschool student can just waive all that off show up one hour a day and then just go play sports.”

And even if students meet all those benchmarks, the local school district can still refuse them the opportunity to play. The final decision is ultimately left up to individual school corporations.

Cox adds that there is some finance behind all of these regulations. In essence, homeschool students need to be enrolled in the school would be receiving services that could not be properly paid for, since they weren’t enrolled.

“The state of Indiana reimburses public schools a particular amount of money based upon their average daily attendance counts that they take each year,” Cox explains. “The amount of money they get for the general fund – which runs the school, which pays the teachers, which pays the light bill, buys supplies, pays coaches – that comes from general fund money. But if there’s students not counted, then there’s no money given to the school.”

“In essence, homeschooled students would not be counted if they weren’t enrolled,” Cox continues. “[They] would be receiving services from coaching staffs, from athletic training staffs, with no monies being contributed to the general fund of the local public school.”

These are all provisions of a rule in the IHSAA’s bylaws passed by its board of directors in 2012-13, in response to a bill presented to the Indiana legislature. Kyle Neddenriep of The Indianapolis Star explains:

IHSAA Commissioner Bobby Cox conducted a series of six town hall meetings around the state in 2011 and ’12 regarding home school athletic participation. The meetings were in response to a bill authored by Timothy Wesco, a Republican from Mishawaka, that passed in the House but died in the Senate. Wesco’s position was that home school parents, as tax-paying citizens, should be allowed to have their children participate with public school teams.

At that time, there were 23 states that allowed home school athletes to participate in some form. But the rule change in Indiana has had limited impact so far. The IHSAA rule states the athlete must have been home schooled the previous three years in order to be eligible, a stipulation meant to limit the participants to students who are truly home schooled.

Cox told StateImpact that IHSAA members and lobbyists helped to defeat the bill, and afterwards worked with its authors to create the participation criteria for homeschool students that exists today.

Cox says he doesn’t have a hard number of homeschooled kids who participate in IHSAA teams – but anecdotally, he knows of fewer than 50 statewide.

“At the end of the day, everybody has to make a choice of how they want to educate their kids, what experiences they want their kids to have,” Cox says. “This is only one – which we think is a very important opportunity and privilege to play at a member school as you meet certain standards. But everybody has a choice.”

Some homeschool parents and groups choose not to participate under the supervision of organizations like the IHSAA.

One such group is the Indy Silver Lightning, a high volleyball school team based in Mooresville. Skylar Moran, 15, of Martinsville, is on the Junior Varsity squad. She just began homeschooling about 60 days earlier with her mother.

“I love playing volleyball and I love getting out and getting to know people,” Moran says of her decision to join the team.

Moran counts volleyball practice as her “gym class.” She gets to participate in a number of other special classes, including swimming at her local YMCA, and cooking with her mom for home economics.

The Silver Lightning is not part of IHSAA. Head coach Kim Mountain organizes his team’s schedule so that they can compete with other area teams without having to meet all the IHSAA’s benchmarks. The team rents space at a church gym in Mooresville twice a week for practice, and hosts other homeschool teams and small Christian schools for “home” games at a nearby sports complex.

Mountain has 15 girls on his roster this year, split between two teams. This is one of the smallest groups he’s had since starting the team with a friend back in 1997 – and he says that’s because more homeschool groups now are putting their own teams together.

“This past year a group of coaches and parents decided they wanted to start a team on the north side, so they got about 27 kids in their program,” Mountain says. “There [are] a lot of really good teams out there.”

Players come in to play from anywhere from Lafayette to Columbus. Mountain spreads the word about his team through Facebook, as well as a basic webpage. Many of his players now and in the past have also played for club volleyball teams, which are private groups, unaffiliated with any sort of school. He’s even seen a few players go on to play in college.

Skylar’s Moran’s mom Diana says she appreciates that her daughter, who struggled with academics and testing in both public and private school, doesn’t have to feel that same pressure to succeed as a homeschooler.

“I think that was a lot of it – keep up with everybody else, fit the cookie cutter mold,” Moran says. “Right now, she doesn’t have to. She fits her mold for who she is. And for me, that makes her life more happy, makes my life more happy.”

Moran says the homeschool community has been very welcoming to her and Skylar, particularly groups like the Silver Lightning.

“Everyone just seems like they’re at the same place we are,” Moran says, smiling. “We found this league and it has helped her. It’s helped her self esteem.”

As for Skylar, she says getting involved as a homeschooler is different than what she was used to – and it scared her at first.

“It’s different than what I’m used to I guess,” Moran says. “At first it seems tough, but then it gets really easy as it goes on.”