No Child Left Behind, the law that holds states and schools accountable for for student performance, is regarded by many as a negative component of public education today. 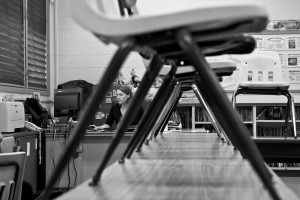 A study released Tuesday through the American Educational Research Association says the law may benefit teachers.

Most teachers think the law actually makes their work easier, researchers found. Educators report feeling more in control of their classrooms, more supported by parents and school administrators, and overall more satisfied with their jobs since the law took hold.

Studies also find that NCLB has made teachers better at what they do, leading them to devote more classroom time to core subjects and spend more time searching for better instructional strategies. And researchers say the correlation to improve student performance makes sense.

“It is unlikely that NCLB could affect student learning without affecting the learning environment, including instruction,” the report states.

It’s not all fun and games, though. The study also found teachers reported working longer hours since NCLB came into play, and perceived less cooperation with fellow educators. Many also say the law has forced them to “teach to the test.”

Researchers say they don’t expect the law itself had too much of an impact on these trends.

“It really wasn’t [there],” said Sean Nicholson-Crotty, one of the study’s co-authors and a professor at Indiana University’s School of Public and Environmental Affairs. “We didn’t find a lot of causal impact from NCLB, but when we did, it was in the opposite direction than the pundits would suggest.” 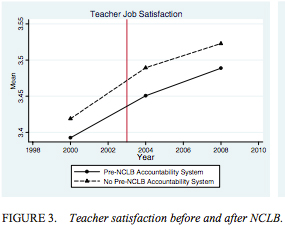 A chart from the report titled “Estimating the Effects of No Child Left Behind on Teachers’ Work Environments and Job Attitudes.”

The study compared results from different annual versions of the National Center for Education Statistics’ Schools and Staffing Survey. Researchers looked at K-12 teachers’ responses to questions about how long they worked, how supported the felt, and how committed they felt to the profession, both before and after NCLB took effect.

The survey itself did not specifically mention NCLB – and Nicholson-Crotty says it’s probably better that way.

“Mentioning the law itself probably introduces some bias,” Nicholson-Crotty says. “If you really want to know how they feel, then simply asking them is the best way to go, rather than priming them with a mention of a law that has a negative public image.”

The Bush-era law, enacted in 2001, is a broad-based reform effort designed to help every American child get up to speed in basic skills like math, reading and science. It gives states control over how they measure student progress with standards and tests, but requires proof of continuous improvement toward 100 percent “proficiency.”

Along with most other states, Indiana currently has an NCLB waiver that excuses us from complying with yearly national progress goals. Instead state officials set their own goal requiring every Indiana school to earn an “A” grade, or else improve by two letter grades and be up to a “C” by 2020.

But as we’ve reported, Indiana is at risk of losing its waiver, and it’s putting all kinds of strain on the State Board of Education to tie up loose ends.