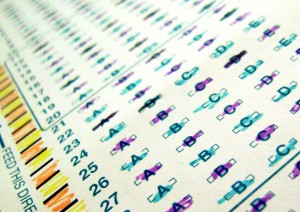 Indiana teachers may be required to teach to a new state test in spring 2015.

At a panel discussion today, State Board of Education legal counsel explained the process to pause accountability after the state’s new standardized tests go into effect this spring.

As we reported last week, a new assessment linked to Indiana’s new standards must be fully operational this spring, to keep the state’s No Child Left Behind waiver.

Indiana’s teacher accountability system will need to adjust to a brand-new test – and State Superintendent Glenda Ritz has suggested giving it time to do so.

As Ritz explained in a guest column for nwitimes.com, when she told the State Board of Education about the new test, she predicted a drop in scores, and as such recommended the board suspend consequences of teacher evaluations.

“For an accountability system to be strong and meaningful to parents and educators, it must also be fair and equitable,” she wrote. “That is why we need to look at ways we can minimize the effect of an expected drop in performance.”

If Ritz’s proposal takes hold, teachers’ salaries would not be affected by high or low pass rates on the new state test.

But would this kind of move be legal?

Michelle Gough McKeown, general counsel for the State Board of Education, says they’re still trying to figure that out.

“Ever since we found out [about the new test], we have been trying to research and look at what other states are doing, whether we think that it would be legally permissible to freeze accountability,” McKeown says.”I think that we’re just trying to be very thoughtful and careful that we do what’s right for students and teachers and schools, to balance all of the different changes but also provide them with information.”

With aid from USDOE documentation, legal counsel is also looking at what happened back in 2009, when Indiana switched from giving state tests in the fall to the spring and accountability sanctions were paused for a year, for comparison.

But no matter what test was chosen for next year, McKeown says, there was bound to be concern.

“There would have been concerns on doing ISTEP for 14-15 and then letting that feed into evaluation and accountability, because that would have not been aligned with the new standards,” McKeown explains.

The feds appear to be open to waiting. In an open letter to state school officers last summer, U.S. Secretary of Education Arne Duncan indicated his department’s willingness to be flexible in allowing delays tying evaluations to the use of student growth data.

“Given the move to college- and career-ready standards, the dramatic changes in curricula that teachers and principals are now starting to teach, and the transition to new assessments aligned to those standards, the Department will consider, on a state-by-state basis, allowing states up to one additional year before using their new evaluation systems to inform personnel determinations,” Duncan wrote.

Indiana school districts must evaluate teachers and other licensed staff annually. Design of the evaluation process is left up to individual districts, but state law requires schools use some kind of student growth data – usually standardized test scores – to rank teachers. Evaluations must be linked with pay.

Those personnel determinations include decisions regarding promotions, termination, salaries and bonuses, according to further guidance released by the U.S. Department of Education.

Earlier this week, the Bill & Melinda Gates Foundation suggested a move similar to Ritz’s to put test-based accountability systems on hold as states transition to new Common Core State Standards and tests. A statement from the Director of College-Ready Education announced the Foundation’s support for a two-year moratorium on high-stakes consequences for teachers and students as schools shift standards.

“Teachers’ anxiety is understandable,” Director Vicki Phillips wrote in her letter. “A rushed effort to apply the assessments could punish teachers as they’re trying new things.”

That’s an idea many states have already turned into actual K-12 accountability delays. Kentucky has administered Common Core-aligned tests since 2012, but test scores have not been included in teacher evaluations yet, and won’t be until the 2015-16 school year. Colorado, slated to administer the Core-aligned PARCC assessments next year, recently approved a similar pardon for teachers for the upcoming academic year.

Louisiana and Maryland have also provided additional time for teachers to become familiar with state assessments before they’re used as a measure of performance.

Indiana’s state board will discuss a plan to submit to the U.S. Department of Education at another meeting at the end of this month.