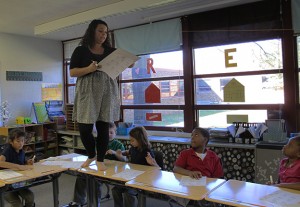 Glenwood Leadership Academy fourth grade teacher Amber Santana leads her students in multiplication drills while pacing across her their desktops.

UPDATED, 5:25 p.m. EST: State education officials will step up oversight of an underperforming school in Evansville, but the efforts will stop short of state takeover.

Glenwood Leadership Academy has received an F from the state for six straight years but is now working with an outside consultant to improve test scores.

B.J. Watts sits on the State Board of Education and teaches in Evansville Vanderburgh schools. He called the district’s approach “proactive.”

“We want schools to own their successes and own their failures,” Watts tells StateImpact. “That’s what the EVSC has done. They kind of got out way in front of the ball here and said, ‘We have an issue. We’re not going to wait until year six to start addressing it when someone else makes us. We’re going to address it now.’”

State Board staff and the Department of Education outreach team will step up their involvement at Glenwood, likely through increased communication with administrators.

“Not only do we want the Mass Insight pieces to continue where they’ve got their changes going — because we see progress — but [we want] a lot more monitoring to be sure that it really is happening, benchmarks along the way,” says state superintendent Glenda Ritz.

The state is currently overseeing five takeover schools, four in Indianapolis and one in Gary.