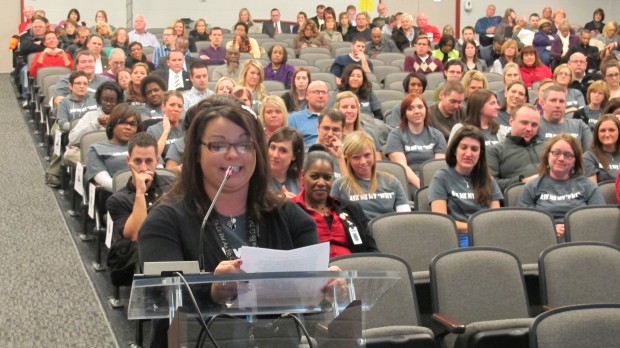 Stopping short of calling for outright takeover of an Evansville school with some of Indiana’s lowest standardized test scores, Indiana education officials have proposed adding state-level oversight for the troubled Glenwood Leadership Academy.

District officials had pleaded with state officials for more time to allow their improvement plan — which includes a $600,000 contract with an outside turnaround group backed by federal grant money — to begin to work at the school.

The recommendation State Board of Education members will consider at their meeting Wednesday would require that contract to remain in place, Center for Education and Career Innovation spokesperson Lou Ann Baker confirmed to StateImpact Monday.

During the meeting, “board staff will elaborate on this recommendation,” write two CECI staffers in the proposal. That will include “specifying the recommended number of years for the intervention and the recommended roles and responsibilities of IDOE and Board staff.”

In technical terms, the State Board would designate Glenwood as a “turnaround academy” under Indiana law. That gives the board flexibility in controlling the school’s funding, among other powers.

Earlier this year, Evansville Vanderburgh School Corporation leaders created a school improvement team within the district office. With the assistance of an on-site team from the Massachusetts-based non-profit Mass Insight Education, they’re charged with turning around five district schools, including Glenwood.

“This is not a short-term strategy,” Smith said. “This is a long-term strategy that people have to understand and support for the long-term. But it’s been proven to work, and it will work here.”