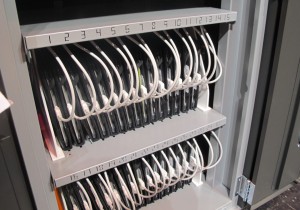 Charging carts are used to image iPads for use in the classroom.

The Lafayette School Board will vote Monday on a proposal to put an iPad in the hands of every third and fourth grade student in the district, reports Mikel Livingston for the Journal & Courier:

The program will be one-to-one, meaning the district will have one iPad for each student in those grade levels at all seven of its elementary schools for the 2013-14 school year.

“We’re going to start out kind of slow, though,” Superintendent Les Huddle said. “There will be some teachers who will volunteer to pilot it the entire first semester before every student and classroom gets their iPad.”

The district is targeting having iPads available for all students by the spring semester.

“We think it enhances our education process with the kids in the classroom,” Huddle said. “We’re pretty convinced there will be a higher level of engagement with our students.”

Each third- and fourth-grade classroom would have its own cart of iPads. The devices will be leased for four years at an annual cost of $214,000. Huddle said those funds will come from Title 1 funding.

An increasing number of Indiana school corporations have launched one-to-one programs in recent years. Changes to how the state’s textbook fund is administered in 2009 make it easier for districts to buy technology with money once earmarked for paper books.

The programs are most common in the upper grades, where middle and high school students get to take the devices home. This can help teachers “flip” their classroom, pre-recording lectures to give students more class time to work on assignments and projects.