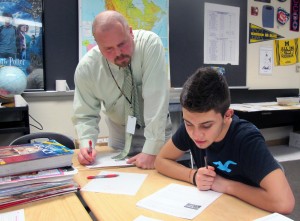 Teacher Wes Upton helps a student with an assignment in his social studies class at Ben Davis Ninth Grade Center in Indianapolis. The 2012-13 school year was the first for state-mandated teacher evaluations.

What makes an effective teacher? This week our colleagues at StateImpact Ohio try to answer that question as they dig into data from three years of value-added teacher evaluations:

Ohio is one of 32 states experimenting with more rigorous, data-driven systems of grading teachers. In Ohio’s case, teachers earn one of five ratings that are a key part of their overall “final grades.” Those grades range from “Most Effective” at the top end of the scale to the “Least Effective” rating Plecnik received.

The rating is based on a statistical measure called “value-added.”

Most teachers — about 70 percent — fall into the middle, average categories. The state started calculating value-added for some teachers in 2010-11 as part of a pilot program and is phasing in the ratings.

What’s riding on these grades varies depending on how school districts choose to use them. But more than a teacher’s pride is at stake. The ratings could eventually become part of decisions about how much teachers are paid, what classes they teach and, if a district has to lay off teachers, their place on the list of who stays and who goes.

Many policymakers view this data-driven approach to sizing up teacher performance as crucial to weeding out bad teachers and rewarding good ones. But some teachers see the measure as a flawed attempt at quantifying something that isn’t easily quantifiable.

Working with reporters from the Cleveland Plain Dealer, StateImpact Ohio found that teachers who scored the highest in the state’s value-added system were almost twice as likely to work in schools where the majority of students aren’t from low-income families.

A teacher who earned consistently high marks from her principal but scored in Ohio’s lowest ratings category, least effective, left the profession.

All Ohio schools use the same system to rate teachers. But in Indiana, the state only requires schools include some form of growth — that is, test score data — as part of the calculation, leaving decisions about how to score teachers to local school corporations.

Indiana’s teacher evaluation law also requires performance be tied to pay. That’s one step further than Ohio’s law, which doesn’t include a merit pay provision. On average, Cleveland educators who were rated less effective in the state’s evaluation system earned $3,000 more than top-rated teachers, according to an analysis of the data.