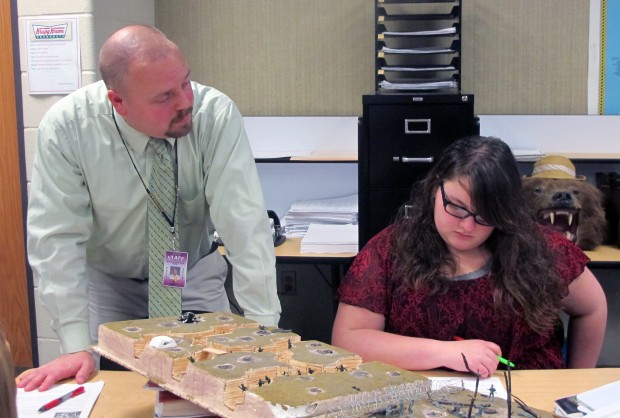 Teacher Wes Upton has just one question for ninth graders in his social studies class at Ben Davis Ninth Grade Center in Indianapolis: Do you like rats?

“And if some of you aren’t itchin’ in your skin, shakin’ in your boots halfway through, then you have no emotion,” Upton tells his students before launching into a lesson about trench warfare in World War I.

In the back of the classroom, Assistant Principal Steve Samuel takes notes on Upton’s instruction. He’s trying to answer a different question: Is Upton an effective teacher?

Here’s what Wes Upton’s lesson on trench warfare looks like: As soon as students take their seats, Upton asks them to answer a question on the five main causes of World War I to jog their memory on material they covered last class. Then, he calls on students randomly to test their knowledge.

Upton wants to stress how trench warfare developed. So he shows students a clip from the movie “The Patriot” where the revolutionaries fire on British soldiers. It’s from a different war, but it gets his point across: Hiding behind trees and land formations was a more effective way to fight than marching head on into battle. He passes around a model of the trenches a former student once built for extra credit.

“Trench warfare completely dominated the majority of World War I,” he booms. “Four-year war. For three of those four years, it was trench warfare — and your textbook has a paragraph on it.”

So Upton assigns an outside reading. First he teaches students how to mark text, a skill they’ll need to head on to college. Then, as students read in small groups and discuss what to highlight, he circles the room to check for understanding. He crouches low next to a desk and asks — was everything negative about the rat-infested trenches?

“The rats knew, as soon as they heard and felt the vibrations from the gunfire way off in the distance, what was coming. And they’d just disappear,” he says.

While Upton explains the assignment — he wants students to pretend they’re soldiers and write a letter home describing life in the trenches — Assistant Principal Samuel circles the room, asking if students understand the lesson objective. For Upton the process isn’t too daunting. But he says some educators aren’t as comfortable having administrators in their classrooms. 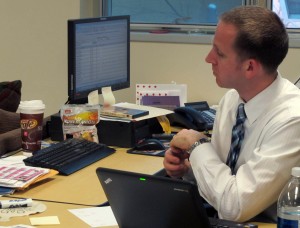 “They get this sense of maybe Big Brother watching you,” says Upton. “But isn’t that what they’re there for, to make sure you’re doing your job?”

‘There Are So Many Factors’

A few days later, Samuel sits down with Upton to grade his classroom performance.

“I was impressed with the conversations the students were having, as far as their depth of knowledge from the reading as well as how on task they all were,” says Samuel.

“I kind of pride myself on the classroom management aspect, no doubt about that,” Upton says.

State law dictates schools divide teachers into four categories — highly effective, effective, needs improvement and ineffective. Districts can use an Indiana Department of Education-approved evaluation system or design their own, but all schools must include student growth data — think test scores — as part of a teacher’s rating. Wayne Township’s teacher evaluation rubric looks a lot like the IDOE’s tool, but with a few tweaks. On rating scale of one to four, Upton earns mostly fours and a few threes.

“You’re safely in the ‘effective’,” Samuel tells Upton. “As long as you get better than a one on the data, you will be ‘highly effective’.”

The state doesn’t test ninth grade social studies, so Upton’s growth score will come from student performance on a common assessment developed by his department. But Samuel says other teachers are worried scores on state standardized tests will drag down their evaluation. 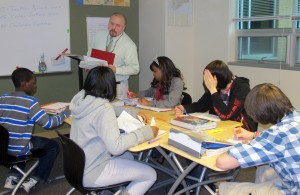 Teacher Wes Upton explains an assignment to students in his social studies class.

“There are so many factors,” says Samuel. “Does this test give us all those factors? And is this test a perfect instrument to do that at the perfect time? It’s tough to say yes to all of those things.”

Samuel says performance evaluations are a part of any job, but he understands the apprehension when student test scores come into play.

“When you start affecting the salary and the livelihood of people, that’s the part that creates the most stress, absolutely.”

How Upton’s Evaluation Will Determine His Next Raise

This year, Wayne Township rewrote the salary schedule to comply with state law. Teachers used to earn annual raises based on years of service and level of education. Now the district uses a points system where teachers can also advance based on things like attendance and participation. (We have a detailed explanation of how the system works here.)

“We have always identified poor performing teachers and worked with them to get better, or they left.”
—David Marcotte, Wayne Township Chief Personnel Officer

“Unfortunately, the reality of it, is that overall, the lifetime earnings of teachers will be less,” says Marcotte.

“Do I like it? No. But do I understand and respect it? Yes,” says Upton. “I mean, no one is going to like to say, you have to wait to make more money.”