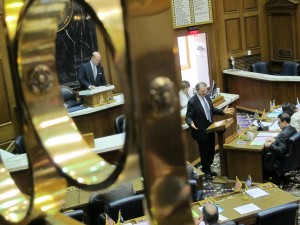 Rep. Matt Pierce, D-Bloomington, delivers a speech on the floor of the Indiana House.

Opponents of a set of nationally-crafted academic standards celebrated the General Assembly’s passage of a bill “pausing” the Common Core’s rollout in the state’s classrooms on the legislative session’s final day. Gov. Mike Pence signed that bill over the weekend.

As we’ve reported, critics have leveled an array of criticisms against the Common Core — some don’t like the standards’ continued emphasis on testing, some fear federal intrusion in state education policy.

But after educators spent this year making plans to roll out the standards in second grade next year, Common Core supporters say the “pause” measure leaves local educators without a clear directive on how to proceed.

As Greenwood director of secondary education Rick Ahlgrim told the Franklin Daily Journal, “there’s no such thing as a pause” when it comes to the Common Core. The AP has the story:

Ahlgrim said math teachers don’t know whether the lessons they’ve created, which include more word problems requiring students to explain why an answer isn’t correct, can still be used.

Whiteland Community High School interim principal John Schilawski said he is worried that switching from one set of standards to another will confuse younger students learning to read. The Common Core-based lessons used in kindergarten and first grade are based heavily on nonfiction works so that children can start learning how to read and think analytically.

“Education is a constant, ongoing process. To make sudden starts and stops to things always has a rippling effect. Somewhere, some child or group of children will feel the effect of uncertainty that’s being caused by legislative indecision,” Schilawski said.

More from the AP story here and more of our Common Core reporting here.