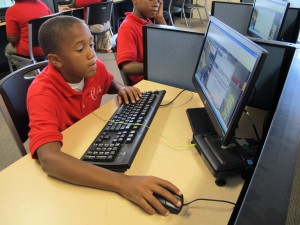 A Carpe Diem-Meridian student logs into a computer in the school's 'learning center,' where each student has his or her own workstation.

A blended learning charter scheduled to open this fall in Fort Wayne will delay opening until the 2013-14 school year, reports Sarah Janssen for the Fort Wayne Journal Gazette:

Carpe Diem Indiana announced Monday that opening the Fort Wayne campus, Carpe Diem-Summit, will be postponed because of delays in finalizing a lease agreement. Despite the delays, the school still hopes to locate at The Summit, a building on the former Taylor University campus, at 1025 W. Rudisill Blvd.

Carpe Diem-Summit was approved to model Carpe Diem-Meridian located in Indianapolis. The school would be run by Carpe Diem Learning Systems, an education management company based in Arizona. The Indiana Charter School Board approved the application for the Fort Wayne campus earlier this year with one key condition.

The school serving grades six through 12 was to show evidence by July 15 that its enrollment would fall between its break-even point and its goal of 130 students for the first year. The break-even number would likely be about 100 students.

But Janssen reported earlier this year that there’s been pushback against Carpe Diem, with parents and community leaders questioning whether Fort Wayne needed the blended learning school.

In a statement, Carpe Diem CEO Rick Ogsten says the delay will give the school more time to explain its hybrid computer/classroom approach to learning. The charter company already operates a campus in Indianapolis, which Kyle wrote about last fall.