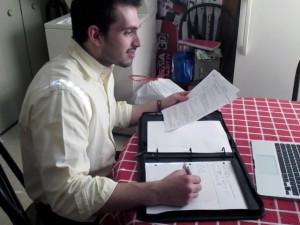 Zach Chatham, 24, graduated from Indiana University with degrees in business foundations, economics and policy analysis in December. He's since worked at a restaurant and a bank.

This post was written by Rachel Hartog, an Indiana University journalism student and WTIU intern.

But students who don’t use vocational education as a stepping stone to a higher degree may find themselves competing for jobs with overqualified college graduates who can’t find work in their chosen fields. As many as 53 percent of people under the age of 25 with bachelor’s degrees are unemployed or underemployed — and they’re taking jobs traditionally occupied by high school graduates.

Emily Kitchen graduated just one year ago from Indiana University in Bloomington but has already applied to more than 60 job openings without landing more than a temporary position at a trade association in Washington, D.C.

“It’s hard after a long day to come home and apply to jobs,” says Kitchen. “They say that applying to jobs is a job in itself, and it’s true. It can get very discouraging and disheartening very quickly.”

According to data released in January by the Center for College Affordability and Productivity, around 17 million Americans with college degrees are working in jobs that don’t require one, such as customer service, waitressing, bartending or retail.

Jonathan Robe, research fellow at the Center for College Affordability and Productivity, says the data highlights a nationwide disparity.

“That’s the paradox we’re dealing with,” says Robe. “In one sense you have to have a degree to be competitive in the labor market. But there’s a disconnect between what the degree is providing and what the labor market is needing.”

According to the Bureau of Labor Statistics, Indiana’s unemployment rate increased to 8.7 percent in March, the highest it’s been for more than a year.

With around 3.5 million college graduates each year, the rate at which the economy is recovering is not fast enough to provide adequate jobs for those with college degrees.

Zach Chatham, 24, graduated in December 2011 from IU as a triple-major. His job for the first six months after graduation was waiting tables at Chili’s, and since then, he has been a customer service representative at Old National Bank.

“I got a degree in business foundations, economics and policy analysis,” says Chatham. “Ultimately I’d like to get my CPA and CMA licenses to be an accountant for a manufacturing firm, but I need a more sustainable job before I can do that.”

Robe says the issue for college graduates struggling to find adequate, long-term employment is in part due to the recovering economy, but it’s also an institutional problem.

“It’s an indication that on a societal level, at the government level, we are overinvested in higher education,” Robe says. “We’re producing more college graduates than there are jobs.”

Underemployed Grads Still Say College Is Worth The Cost

While Pence’s legislation promotes paths to employment for students who may not be college-bound, they ultimately end up competing with millions of college graduates for limited positions. 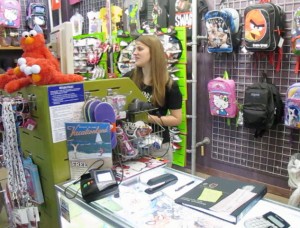 Indiana University graduate Jessica Marley works as a manager at a shoe store, Journeys Kidz. Like Marley, more than half of the 3.5 million college students who graduate each year are underemployed.

Patrick Kelly, senior associate at the National Center for Higher Education Management Systems, remains optimistic about the opportunities for college students in the labor market.

“There’s hope that the economy will come back around,” says Kelly. “We’ve gone through several downfalls. We’re not destined to be in a recession the rest of our lives.”

Kelly says even though the cost of a college degree is up over a million dollars over a lifetime, he believes a college education is still worth the cost.

Research from the National Center for Higher Education Management shows that college education pays off. Those with bachelor’s degrees earn far more over the course of their careers than those with only high school diplomas.

This potential earnings power is enough to keep Kitchen in job-hunting mode.

“It was definitely worth it to go to college even if I am underemployed,” says Kitchen. “I wouldn’t have any type of worthwhile job if I didn’t go to college. Even though it will take a while to pay off my student loans, every job out there asks to have a college degree. Now it’s starting to be that you need a master’s degree.”