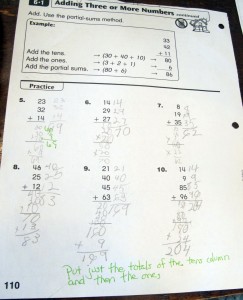 A group of Indianapolis parents leading a statehouse push to withdraw Indiana from the Common Core say they wouldn’t have known Indiana’s academic standards had changed if not for the math homework.

“You wait to get the math papers and you wonder what they’re going to do this week because it’s just bizarre,” says Suzanne Sherby. “I definitely think the older kids learned in a much more traditional way, and the little kids just aren’t. It’s not part of the curriculum.”

Sherby told StateImpact her son’s teacher subtracts points when he doesn’t show work she says isn’t needed to solve the problem — for example, a question might ask students to draw objects then cross some out to solve a subtraction problem.

It’s true that the Common Core wants teachers using pictures and other aids to communicate the tenants of basic arithmetic to very young children. But one of the architects who helped write the math standards says kids who are ready to move beyond blocks and drawings — known as “manipulatives” — shouldn’t be penalized if they don’t show all their work.

“Any teacher that says ‘No, no, you must use the manipulatives to show you understand,’ doesn’t understand the Common Core,” says Doug Clements, a mathematics and early childhood education researcher at the University of Denver.

Clements says the Common Core is about getting kids to think conceptually about math — for example, making sure they understand the place values of ones, tens and hundreds. Teachers often do this using units called “Base 10” blocks. But Clements says inevitably, some students will grasp the reasoning behind the cubes faster than their classmates.

Teachers might end up with “a group of kids or a whole class of kids that can skip the manipulative level or the expanded notation level because they understand it,” says Clements.

He says if a kid is doing the math in their head and can explain their thought process to the teacher, it’s time for them to move on with more advanced concepts within the Common Core. Clements says there’s no script within the standards that says kids capable of doing more advanced math need to continue using manipulatives.

“We got to spread the word that it may be a misconstrual,” says Clements.

Math teachers, what do you think?