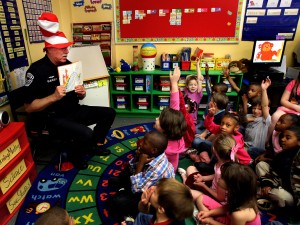 A school safety bill that would required armed personnel in every Indiana school makes its ways to the House Ways and Means Committee Monday. As we’ve written before, that controversial amendment got tacked on to a proposal to help districts hire school resource officers. The Indianapolis Star’s Scott Elliott explains:

At the outset, the goal was to create a funding stream of $10 million for schools that wanted help to hire a school resource officer for the first time. In most cases, SROs are cops with special training who are assigned full- or part-time to a school. Somewhere between a third and a half of Indiana schools have SROs. The bill included provisions spelling out the duties of an SRO for the first time, beefing up school safety plans and emphasizing bullying prevention.

But here’s the thing — what SRO’s do best is not necessarily shoot armed bad guys. They are most important in preventing that bad guy from ever coming through the door.

They do that mostly by being a presence in the school and using the skills they learned as police officers, the most important of which is listening. Plots of violence against schools are most often thwarted from within when someone gets wind of it and tells an adult. An SRO who has strong relationships and good awareness is a school’s best chance of unearthing that sort of vital tip.

So says Kenneth Trump, who is possibly the nation’s top expert in school safety. Every time I’ve spoken to Trump, he starts out by arguing that metal detectors and armed guards at every door won’t stop a shooting as effectively as a full time SRO who is deeply engaged in the life of the school.

Senate President David Long, R-Fort Wayne, says if the House approves the bill with the amendment requiring armed personnel in every school, he’ll see it gets taken out when it returns to the Senate.

But even if the language ultimately gets stripped from the bill, it’s started an important conversation about who should carry guns in schools.