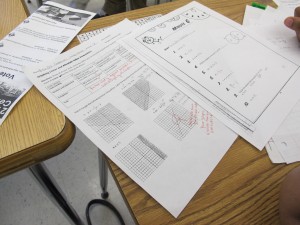 The Common Core State Standards will rewrite what students need to know by the time they graduate high school. The standards will mean a new test for students and new curriculum in schools.

Our StateImpact Florida colleagues are taking an in-depth look at the 13th grade, the remediation many students need before they’re ready to complete college coursework. As Sarah Gonzalez reports, policymakers in the Sunshine State hope the new Common Core academic standards will help bridge the gap:

The problem is that there is a disconnect between what’s taught at the K-12 level and the skills that students need to succeed in college. That’s been understood for a while. The research arm of the Florida legislature said as much in a report on remedial education back in 2006.

Only recently, however, have state policy makers begun making changes that aim to address the situation. The goal is to strengthen the K-12 system so that fewer students need remediation once they get to college.

The biggest change involves scrapping the Florida Comprehensive Assessment Test, or FCAT, the test that students must pass in order to graduate high school. The exam tests only 10th-grade level skills. The state is also getting rid of its existing regime of academic standards that guide what students are expected to know in each grade level.

Starting in 2014-15, Florida will use something called the “Common Core State Standards.” Some 45 states and the District of Columbia have agreed to use this common framework, which is supposed to align what students learn in K-12 more closely with what they need to know in college.

Florida is leading a coalition of 21 states and the District of Columbia in developing a new assessment system called PARCC, which replace state tests like the FCAT and the ISTEP.

Of course, it’s worth noting that the Florida State Board of Education cited Common Core implementation when they selected ousted Indiana Superintendent Tony Bennett as the state’s next schools chief. Bennett has been instrumental in the development of the PARCC assessment.

Indiana students will start taking that test in 2014-15.