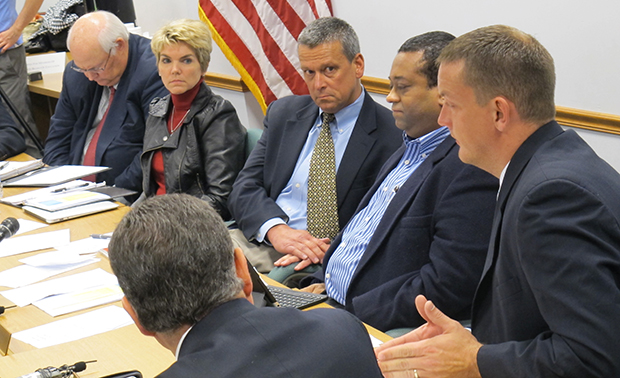 State superintendent Tony Bennett (center) and State Board of Education members discuss the REPA II proposal at their meeting Wednesday in Indianapolis.

In front of a vocal overflow crowd, Indiana’s State Board of Education approved Wednesday a broad suite of changes — known as “REPA II” — to the rules used to issue licenses and other credentials to educators in the state.

State superintendent-elect Glenda Ritz was in the room as the executive panel approved the rules (which she opposed in her campaign but will soon be charged with overseeing) on a 9-2 vote.

Minutes before the vote, board member Neil Pickett requested officials make two changes to the guidelines.

One change, which the board approved by its final vote, dials back provisions in the rule allowing teachers to earn licenses to teach in new subject areas by passing a test. The second change adds a “pedagogy requirement” to a controversial credential that allows a college graduate who didn’t major in education to earn a teaching job by passing an exam.

You can see more on what was in the proposal here.

Indiana State Board of Education

Before the vote, Ritz urged the state board — including current state superintendent Tony Bennett — to table the provision until she took office.

“We cannot have anything standing in the way of putting qualified teachers in our classroom,” she said in a comment she gave to the board at Bennett’s invitation.

Changes To The Rules

A little more on the last-minute changes to the rule proposed by state board member Neil Pickett:

‘These Are Not Just Tweaks’

After the vote, Gerardo Gonalez, dean of the IU School of Education, told StateImpact he thought the last-minute changes were steps in the right direction. But he still couldn’t support the proposal.

Indiana’s education institutions are still implementing a 2010 revamp of the state’s teacher license rules, known as “REPA” or “REPA I.” Gonzalez says it was inappropriate to make further changes until the impacts of that provision could be studied. As he told the board in his public comment:

I can certainly see why some minor adjustments to the existing REPA rules may be necessary. But why not wait until REPA is fully implemented and evaluated before adding additional new rules that have no track record or basis in research?

The proposed REPA II rules are not just tweaks; they include several major new proposals as well as the reintroduction of many of the rules proposed in the original REPA and taken out because of public comment. While I applaud your efforts to incorporate suggestions made during the REPA II public comment period, much more work needs to be done.

“Just because our aim is to provide greater flexibility, we’re focusing more on results now with regard to licensing of teachers, that does not mean all of a sudden the floodgates are going to open,” Dale Chu, Assistant Superintendent of the Indiana Department of Education, told StateImpact in June.

No matter how good your pedagogical skills, it’s not possible to be an effective teacher if you do not know the subject you are teaching. Our current system does not do enough to address that fact, and REPA represents a positive step to correcting that important oversight…

Nothing that you have proposed in REPA I or REPA II will guarantee anybody’s qualification for a job. All that you are doing — other than raising the bar on content knowledge — is providing greater flexibility at the local level and allowing the potential pool of candidates to be expanded. Any candidate for a job must still go through a hiring process where, I certainly hope, the professionals making those hiring decisions will consider all the qualifications of the candidate.

UPDATE, 5:00 pm ET with comment from state superintendent Tony Bennett. He told reporters after the meeting: