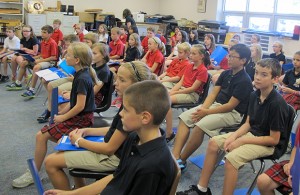 Public schools in Indiana have added teachers and administrators much faster than they’ve added students in the past two decades, according to a new report from The Friedman Foundation for Educational Choice.

“Indiana has had a more extreme trend relative the national average in terms of becoming more top heavy,” says the report’s author, Ben Scafidi, a professor of economics at Georgia College. “Administrators increased at five times the rate of students and three times the rate of teachers.”

Scafidi is a fellow at the Indianapolis-based Friedman Foundation, which advocates for school choice, including non-public options like vouchers to attend private schools. He says he isn’t buying the argument that the education mission has grown increasingly complex and schools have had to add staff to keep up.

“There might have been good reasons why employment was growing so fast in public schools in the ’50s, ’60s, ’70s and ’80s, but I think it’s hard to defend over the last generation such a large increase in employment relative to the increase in students.”

Indiana’s student population has grown 9 percent since 1992, yet employment is up 31 percent over the same period. Scafidi says if Indiana schools had added teachers at the same rate as students, the state would have saved $800 million annually.

But what surprised Scafidi the most was what happened in the years after the implementation of No Child Left Behind. Critics of George W. Bush’s sweeping education overhaul say the act increased bureaucracy in public schools.

Schools added more teachers after 2001 than they did in the 1990s, when hiring of administrators outpaced the hiring of educators.

“They can move to a private school or a virtual school or a charter school, and that’s going to put very strong incentives on public school managers to use taxpayer resources more wisely,” he says.

The Friedman Foundation has an interactive map that takes a state-by-stake look at public schools employment between 1992 and 2009.