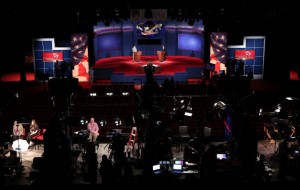 Members of the media prepare television sets at a dress rehearsal for Wednesday night's presidential debate at the University of Denver.

Emily Richmond has a list of buzzwords on the The Educated Reporter blog we might listen for during the first presidential debate in Denver tonight. It’s inevitable that education will come up, she writes, but don’t count on a long discussion:

That’s not because the candidates don’t have anything to say on the issue, or that they don’t differ in their approaches.

At the National Press Club on Tuesday, U.S. Secretary of Education Arne Duncan was asked what the biggest difference might be between a second-term Obama administration and a Romney presidency. Duncan summed it up thusly: Obama believes education is an investment, while Romney sees it as an expense.

That’s an oversimplification, but it certainly crystallizes the Democrats’ dire predictions of the slash-and-burn budget cuts to key programs that serve at-risk students if Romney were elected. And Romney has been decidedly light on specifics about the central planks of his education platform, although he made it clear at NBC’s Education Nation last week that using federal dollars to fund the new Common Core State Standards  wouldn’t be one of them.

We’d be lying over here at StateImpact if we said the idea of playing presidential debate bingo didn’t make us chuckle. But Richmond’s list of education buzzwords gets at how important policy created now will be in the future.

So we’ll second Richmond’s recommendation to check out The Christian Science Monitor‘s list of key education policy differences between Obama and Romney before tonight’s debate. If you’re following along here in Indiana, we hope you’ll check out some of our election resources, too.

In the coming weeks, we’ll be ramping up our coverage of the state superintendent race between Tony Bennett and Glenda Ritz. We’ll be following what gubernatorial candidates Mike Pence and John Gregg have to say about education in Indiana. And we’ll also be taking cues from you.

What questions do you want answered? What topics do you think we should be covering? You can reach out to us on Twitter or leave us a comment below. (We’re really easy people to get ahold of, we promise.)