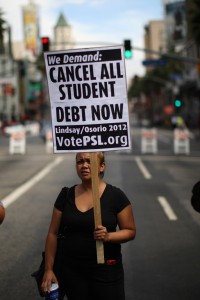 Demonstrators in Los Angeles protest the rising cost of higher education on Sept. 22, 2012. According to the U.S. Department of Education, more than 13 percent of borrowers who began paying off their student loans in 2009 had defaulted on payments three years later.

Indiana’s three-year student loan default rate is slightly lower than the national average, according to data from the U.S. Department of Education.

About 12.9 percent of Indiana borrowers who began repayment in 2009 defaulted on their loans, compared to 13.4 percent nationally. That’s slightly lower than last year’s 13.8 percent. From Inside Higher Ed:

The drop could indicate that a smaller proportion of students are defaulting, or that colleges, conscious that the three-year rates matter more this year than last, have been more proactive about pushing students who could not repay into deferment or forbearance, programs that allow students to postpone repayment without counting them as defaulters. The rising two-year rate, which is now at its highest level since 1996, was largely attributed to the still-struggling economy.

The two-year default rate is up from 8.8 to 9.1 percent. That’s for borrowers who began repayment in 2010. The Department of Education is transitioning to the use of three-year rates to determine the college’s eligibility for federal financial aid.

Thirty states and the District of Columbia had lower three-year default rates than Indiana. Arizona had the highest percent of borrowers in default at 22.9 percent while North Dakota had the lowest at 5.1 percent.

Students who borrowed to attend for-profit schools are defaulting at the highest rates — more than one in five. For public colleges, the default rate is 11 percent. It’s 7.5 percent at private, not-for-profit colleges.

But over at The Quick & The Ed, Thomas Dawson argues the data doesn’t tell us enough about the type of borrower defaulting on student loans:

That’s because the Department does not release loan default rates broken down by student demographics. If we want to know if default rates are related to Pell grant status or the type of major or course of study a student pursued, that, too, is not released by the Department as part of its loan default analysis. If Latino students, who are more debt averse (according to studies by the Institute for Higher Education Policy and Excellencia), default at greater rates, you won’t learn that from the Department’s analysis. Similarly, if older students are more likely to avoid default than younger students, that too is not revealed.

Here’s why that information is needed: Dawson writes that until we have a better idea of which borrowers are struggling to repay their loans, it’s hard to nail down a solution to the problem of excessive student debt. (Keep in mind that just because a student borrowed doesn’t mean they ended up with a degree.) With better information, he argues, higher education can develop policies that target the most at-risk students.