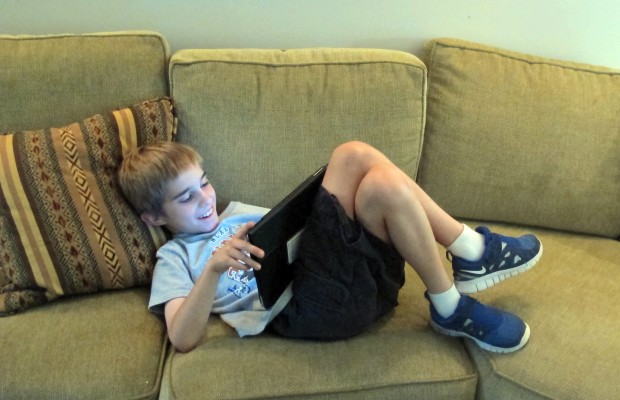 Andrew Locke, 9, plays a game on his mom's iPad. Andrew has dyslexia and ADHD and is repeating third grade.

It wasn’t the school or the state’s decision to retain Andrew, who has dyslexia and ADHD. His parents started talking about holding Andrew back in the spring after he failed part of the ISTEP test. His birthday falls late in the year, he was smaller than his peers. They wondered if another year in third grade might help him down the road.

Andrew’s father, Steve, teaches second grade in Speedway, so he works with kids his son’s age everyday. He was in favor of retention. But Andrew’s mother, Jennifer, wasn’t so sure. It wasn’t until late summer — just before school started — that the Lockes made a decision. They sat Andrew down and explained why they thought holding him back a year was a good idea.

“You want your child to do well,” says Jennifer. “You want them to have good self-esteem.”

How High Stakes Testing Is Creating Anxiety For Students

Andrew’s story is interesting because Indiana’s high stakes reading test has so many parents worried their kid won’t be promoted to fourth grade. As we’ve written before, the research on retention is mixed at best:

So does retention work or not? In a panel discussion sponsored by The Brookings Institute, early education advocate Karen Schimke explains why it’s so hard to research retention in the first place: You can’t promote and retain the same child. So even a well-designed study can’t necessarily control for other factors in students’ lives that may change their outcomes.

A study that tracked the progress of students in Florida — one of the first states to pass a third grade reading law — for six years found significant short term gains in the first two years after retention, but those effects disappeared over time. Other research suggests retention works best when students who are held back are exposed to different teaching methods and lessons the second time through.

The Lockes stand by their decision, but Jennifer says she’s still concerned about the pressure put on students like Andrew to perform on standardized tests.

“In the third grade classrooms, they start talking about IREAD the first or second week of school,” she says. “But for the kids who struggle, there’s an underlying anxiety for the whole year.”

Today, Andrew likes reading. He’ll tell anyone who will listen about his favorite books, the Guardians of Ga’Hoole series by Kathryn Lasky. But reading wasn’t always easy for him.

“In first grade, I was way far behind,” says Andrew. His teacher would give his classmates an assignment that they’d finish while he was still getting started. “I was always a half an hour behind my class.”

“It was a struggle with homework,” says Jennifer. “Anything he didn’t get done would be sent home. So on top of regular homework, we had all the classwork he didn’t get finished.”

Eventually the Lockes decided to put Andrew on medicine for ADHD. That helped. Andrew says he was finally able to focus on his schoolwork. He began to love reading. But something still wasn’t clicking.

“We noticed he was behind his classmates. You think, ‘You know, maybe he’ll catch up.’ But he was still struggling,” says Jennifer.

His teacher didn’t think he was performing to the full extent of his abilities either. Halfway through second grade, his teacher suggested the Lockes have Andrew tested for a learning disability. That’s when Jennifer says Andrew finally got the diagnosis he needed to succeed: Dyslexia.

Why The Lockes Felt Retention Would Work For Andrew 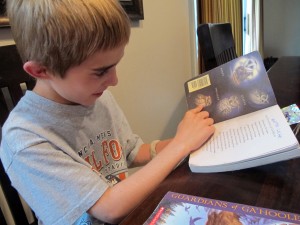 Andrew Locke, 9, talks about his favorite books, the Guardians of Ga'Hoole series by Kathryn Lasky. He likes the series because they feature his favorite animal, owls.

Dyslexia on its own isn’t enough to qualify Indiana students for special education services. But because Andrew has ADHD and a documented history of trouble in school, he’s able to have an individualized education plan. He gets more time on tests. If he’s falling behind on classwork, his teacher might truncate the assignment — have him do 10 problems instead of 15, for example. The Lockes wanted those accommodations in place in advance of statewide tests last spring.

Jennifer says she’s found Andrew’s school to be very supportive. The Lockes pay for private tutoring, but the tutor is able to meet Andrew at the school twice a week.

“Sometimes I’m happy I have dyslexia,” says Andrew. “Believe it or not, you’re learning more than your class actually is.”

“I know every parent says they have a bright kid. But Andrew is bright. He can figure stuff out. But he wasn’t figuring out how to read fluently.”
—Jennifer Locke, parent
That’s because tutoring for dyslexic students teaches letters, sounds and word origins in a way that’s different from most classroom instruction. Jennifer says it’s not that people with dyslexia can’t read, it’s just that they have to be taught a different way.

“Andrew can sit and read a book and be a happy kid, which is contrary to what a lot of people think dyslexia is,” she says.

A month and a half into the school year, Jennifer says she knows she and her husband made the right decision retaining Andrew. He’s doing well in school. He’s picking up on concepts he didn’t quite master last year. And he’s OK that his friends are now a year ahead of him.

“All I’m missing out on is gigantic piles of work in fourth grade,” he says.