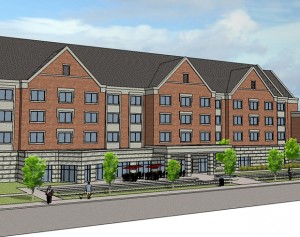 Leaders of Ball State University have authorized an eminent domain claim on a piece of land currently occupied by a Muncie printing business to begin the process of building a new on-campus dorm, hotel, and restaurant.

BSU’s Board of Trustees voted unanimously Wednesday to file a complaint with Delaware County, starting the eminent domain process, our colleagues at Indiana Public Radio in Muncie report.

“I think in this case it’s the right thing to do for the university, the right to do for the city of Muncie, and in all honesty, I think it’s a good thing for the business owner,” says Frank Hancock, the vice president of the Board of Trustees.

Ball State officials say they’ve discussed how to proceed on the project for the past year, and have determined the parcel of land printing business owner Chris Hiatt currently owns is the only parcel the university needs to acquire to start the construction process on the new building, called McKinley Commons.

But Hiatt says the university hasn’t fully explored alternative courses of action and seizing his land will ultimately decimate his business.

The new building would include student housing, a full-service hotel, two restaurants, and over 7,000 square feet of meeting space…

Owner of Hiatt printing Chris Hiatt was at the meeting, but did not speak when board asked if the public had a comment.

President of the board Hollis Hughes said Ball State has filed one eminent domain in the university’s history, and they didn’t have to use it.

After the meeting, owner of Hiatt Printing, Chris Hiatt, sent out a news release. “[Seizure of property] is not a convenient vehicle for psuedo-government entities such as Ball State to use to seize private property for their own “capitalistic wish-lists” for which there are many alternatives.” The news release also said that Ball State has not offered anything to Hiatt Printing that “doesn’t render if worthless and assures its ultimate demise.”

Board members are hoping that McKinley Commons will remain on track to open in the fall of 2014.