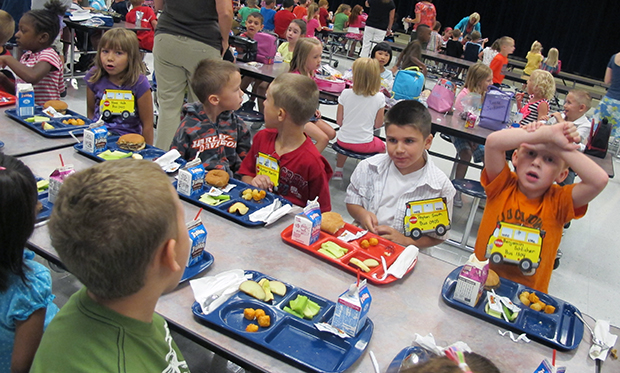 First graders at Wea Ridge Elementary in Lafayette eat lunch on Thursday, Aug. 16, 2012. Schools in Indiana and across the country are changing what they're serving to meet new federal school lunch guidelines.

What kids are eating in their school lunches has been a topic of discussion since the School Nutrition Association was created in the 1940s. That’s because the guidelines are always changing.

New rules handed down earlier this year from the United States Department of Agriculture focus less on calories and fat and more on whether all the food groups are being served.

At Wea Ridge Elementary in Lafayette, a colorful menu board helps students make good choices as they move through the lunch line. Last year the Tippecanoe School Corporation served cheeseburgers. But this year they’re serving hamburgers. That’s because the new guidelines have changed how old favorites are served while adding more fruits and vegetables to the menu.

Fifth grader Calen McCardel noticed right away there’s something different about her burger.

“We’re eating a hamburger — they usually have cheese on them, but today they don’t — pineapple, we’re drinking milk, and we have veggie tots and potato tots,” says McCardel.

Overall, she says her meal is pretty good — but she’s not sold on the sweet potato tots. So she eats the potato tots and throws the vegetable tots into the trash at the end of the lunch period.

Lori Shofroth is the Director of Food Services for the Tippecanoe School Corporation. She spent the summer reformulating cafeteria menus to meet the new federal school lunch guidelines. They’re a big departure from the nutrient-based system the district used for four years. Shofroth counted sugars, salts, fats and calories to make sure kids were getting a well-balanced meal at school.

But over the next two years, schools in Indiana and across the country have to move to a food-based menu modeled after the federal My Plate guidelines.

“That is the five food components which is your fruit, your vegetable, grain, protein and dairy,” says Shofroth.

Starting this year, every school lunch has to feature three of the five components. That means every choice Shofroth offers is part of an intricate puzzle. She’s used to meeting daily minimums. But now schools must also adhere to weekly maximums. Right now, Shofroth can only get a 2-ounce burger from her suppliers — and for elementary students, that’s one-fifth of the weekly protein allotment.

“Over a week’s period time, you can only have ten meats. So if you put anything else out on that menu or add a piece of cheese to it, it’s 0.5 more proteins,” says Shofroth.

But kids like the cheese, so Shofroth is working with her suppliers to see if she can get a smaller meat patty. A big part of her job is balancing the new requirements with what her customers —  the students — will eat. Kids like tater tots, but there are too many starches on the menu and not enough red-orange vegetables. So for now cafeterias are serving a 50/50 blend of regular and sweet potato tots.

McCardel isn’t the only student who doesn’t like the vegetable tots. Standing behind the trash bins at Wea Ridge, Shofroth gets to see first hand how students are reacting to changes as half-eaten burgers and untouched celery sticks go into the trash.

How Healthier Food Is Driving Up Lunch Costs

Participation across the district in the lunch program is about 70 percent. That’s pretty good, but Shofroth actually needs more kids to eat at school. Here’s why: Students pay about $1.85 for a meal that costs the corporation about $1.10 to provide. That leaves about 75 cents to pay for fixed costs like labor and equipment. Those costs aren’t likely to go down, but food prices are going up. Starting next year, schools can only serve whole grains — right down to the breading on the chicken nuggets.

“In the past, the free lunch students may have been supporting the lower price of the paid student.”
—Julie Sutton, Indiana Department of Education Child Nutrition Program

“I do believe they went three dollars more a case than what a regular chicken nuggets would be,” says Shofroth.

Last year the district ordered 750 cases of chicken nuggets. To put that number into perspective, the cost increase is the equivalent of 1,200 paid lunches. But it’s been two years since the school board raised lunch prices, and even then, it was just by a dime.

That’s another complicated numbers game. The federal reimbursement for a free lunch has increased faster than the price of a paid meal in most school districts. In those cases, money from the free lunch program subsidizes the lower price of a paid lunch.

Now the USDA is telling schools that are charging less than $2.51 to increase their prices by roughly 3 percent each year until they catch up. With the new maximums, that means it’s likely parents will be paying more … for less.