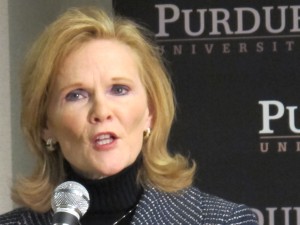 Indiana Higher Education Commissioner Teresa Lubbers speaks in support of Purdue's announcement that the school will shift to a year-round academic calendar — a move school officials hope will save students money.

Funding cuts have states rethinking how they distribute a limited pool of higher education dollars, writes Kysie Miao for the Center for American Progress:

States have commonly allocated funds on the basis of enrollment, a process that reinforces their commitment to college accessibility and ensures a relatively equitable distribution of per-student spending across institutions. Enrollment, however, is a poor predictor of overall institutional performance. Ongoing budget cuts, combined with stagnating graduation rates and a rising national demand for highly educated workers, make it increasingly important for states to invest in completion too.

About half the states have experimented with performance funding metrics in the last 30 years, Miao writes. But many early formulas failed to account for different types of schools, nor did they truly incentivize colleges to improve.

Indiana adopted its model in 2011. It allocates 5 percent of the state’s higher education budget based on performance metrics — “real money” compared to the 1 or 2 percent of previous years, says Teresa Lubbers, the state’s Commissioner for Higher Education. It’s set to increase to 6 percent for the 2013-14 academic year and to 7 percent the year after that.

“We’re really trying to increase the number of people who complete [degrees], who complete on time, and we want to make sure we are incenting the right kinds of degrees.”
—Teresa Lubbers, Indiana Commissioner for Higher Education

The state’s colleges are measured on things such as degree completion and on-time graduation rates.

According to Miao, one of the strengths of Indiana’s model is when it calculates enrollment. Student counts are taken at the end of the semester rather than the beginning, which emphasizes course completion.

“Doing so incorporates a stronger element of accountability into enrollment-based funding,” writes Miao. “As a result, Indiana essentially allocates a much larger portion of funding based on performance than it would appear.”

Here’s how Indiana stacks up against other “best practices” outlined in Miao’s report:

Miao also notes that many states have written “stop-loss” policies into their funding formula so institutions don’t experience wide swings in funding year over year.