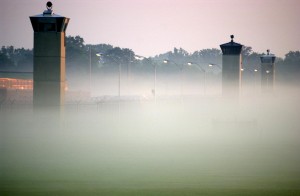 The Federal Prison in Terre Haute, pictured in 2001.

“Society is not forgiving us.”

In a phrase, it’s the same grim story Charles Hawkins hears all the time from the former prisoners. He directed Indiana State University’s Correctional Education Program, which offered college degrees to offenders in state prisons until budget cuts cancelled the program and cost him his job this year.

“‘I’ve done my time, I’m ready to change my life,” ex-prisoners tell Hawkins. “‘I’m ready to turn my life around. And at every door that opens, I’m getting kicked in the teeth.'”

The numbers tell an equally-depressing story. Though higher levels of education are supposed to open doors to employment, even offenders who leave prison with college degrees or high school diplomas face highly uncertain job prospects after returning to the outside world.

In our story about prison education earlier this week, we referenced a report from the Indiana Department of Corrections and Ball State University.

The study followed more than 6,500 offenders released from Indiana prisons in 2005 for five years, tracking who was employed, who was unemployed and who reoffended. The report also broke the group down demographically between violent, non-violent, sex and drug offenders.

Here are four takeaways from that study:

Listen to our story about prison education here.