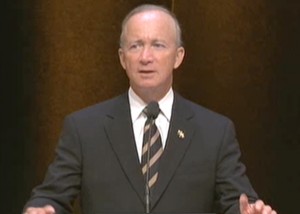 Gov. Mitch Daniels will be Purdue University's next president.

“I’ve always said ‘President Daniels’ has a nice ring to it.”

That was Indiana Sen. Dan Coats’ reaction to the news Gov. Mitch Daniels will become Purdue University’s next president.  His statement was one of several that poured in immediately after the widely-anticipated announcement Thursday morning.

Coats joined a number of Indiana political leaders in lauding the move, saying Daniels was “uniquely qualified” to lead the school.

Others, however, called the move inappropriate for a sitting governor, pointing out Daniels was responsible for the appointment of many of the Purdue Trustees who made the presidential pick. Some reactions below the jump:

As a Purdue engineering graduate and a longtime advocate for the university in the General Assembly, I am thrilled with the selection of Governor Mitch Daniels as Purdue’s next President… With his experience and key role in transforming Indiana over the last eight years, Gov. Daniels is uniquely qualified to capitalize on Purdue’s tremendous faculty and international reputation. I look forward to working with the Governor to take Purdue, and our state, to the next level.

This announcement signals an exciting new chapter in the life of a great university and a great public servant. In naming Governor Daniels as President, Purdue trustees chose to select a leader with superior intellectual credentials and a range of public and private experiences that will serve him and Purdue very well.

But it’s unlikely Daniels will be speaking publicly in support of Pence on the campaign trail. At the announcement this morning, Daniels said he will immediately recuse himself “from any partisan political activities or commentary.”

Officially, [Daniels] is now the lamest of lame ducks. This morning, he announced he’s essentially going to be going to work and collecting his check. It’s a slap in the face to hardworking Hoosiers who will pay his salary. For a man that often rails against public employees, he sure must like being one now. After spending eight years as Governor, Daniels now becomes another public employee as President of Purdue University when he leaves office.  He gets the job with few of the normal qualifications that college Presidents typically have.

Purdue computer science faculty member Gene Spafford took to his blog to voice his skepticism about the Daniels selection:

He has not shown particular understanding or accommodation for the value of academia beyond what it can do to pump up the state economy during his term as governor… I am not in any way suggesting that Mr. Daniels has exerted undue influence or is incompetent. He has served well in many business and elected roles, and been reasonably successful. He has seemed to be very honest and forthright. He has also seemed open to bucking political pressure from even his own party. In general, he also seems like a reasonably nice guy. My point is that these qualities are not sufficient to make one qualified for the role of president at a Tier I research university.

“I think in today’s world that the president of a university number one has to be a great fundraiser, and I think Mitch Daniels has proven he’s a good fundraiser,” Kruse said Thursday.