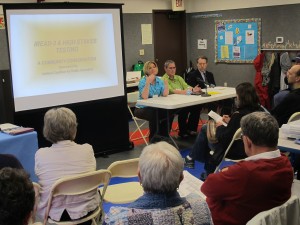 A panel including two teachers and State Rep. Matt Pierce speak at a forum on the IREAD-3 exam in Bloomington in April.

For starters, a caveat: There isn’t much research on whether holding back students for third grade reading scores is a good idea, reports NPR’s Tovia Smith.

In other words, whether you think the Indiana students that are held back for poor scores on this year’s IREAD-3 exams will be better- or worse-off depends on which studies’ results you believe.

UC Santa Barbara professor Shane Jimerson gave voice to the common wisdom among many — if not most — classroom teachers that retention is not a good intervention strategy. In 2001, he tried to put the retention debate to bed:

Rather than encouraging further research regarding the relative efficacy of grade retention and social promotion, it seems prudent to move beyond the question “to retain or not to retain?” as we enter the new millennium. In isolation, neither social promotion nor grade retention will solve our nation’s educational ills nor facilitate the academic success of children. Instead attention must be directed toward alternative remedial strategies.

But in the 2002-03 school year, Florida started holding back third graders who couldn’t pass a reading test. In the eyes of some researchers, the data show this policy has changed the tone of the conversation.

University of Arkansas professor Jay P. Greene wrote that Florida students who were held back made greater gains over time than students who failed the exam, but were promoted anyway. His conclusion? Retention based on reading scores works:

Yet Greene himself points out the results of his analysis of Florida data are very different from the results of studies in 2004 and 2005 showing a similar policy in Chicago had disastrous implications for students. From FairTest:

The study found that retained students continued to score poorly. Citywide improvements in third grade scores largely resulted from a dramatic increase in retention at grades 1 and 2, which reduced the number of low-scoring students in grade 3… Retention does not work for those who are retained, as retained students showed little gain, despite intensive teaching to the test. Twenty-nine percent of students who were retained at eighth grade in 1997 had dropped out two years later.

Indiana students who did not pass the IREAD-3 — a 40-question, 72-minute reading skills exam — last March get one more chance to pass the exam this summer.

Not all of the students who did not pass in March will necessarily be retained. State education officials say roughly a quarter of the nearly 12,000 students — about 15 percent of Indiana’s third grade population — who didn’t pass the exam were within 16 points of a passing score.

ELL students, special education students, and students with disabilities may receive good cause exemptions that would allow them to move on to fourth grade.