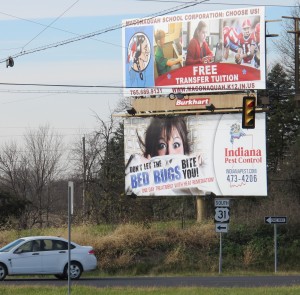 We’ve written before about how Indiana’s public schools are adopting full-bore marketing plans to attract students to their districts — even occasionally buying ad space inside the boundaries of neighboring districts.

The Madison Courier reports on the change in state law that started the trend, and how that trend is playing out in southeast Indiana:

The change came after the state took over the school general fund in 2009 and tweaked the rules for student tuition support. Under the new format, commonly called open enrollment, the tuition support follows the student. It extends to charter schools, as well, because they are public schools and open to students across the state.

For public school corporations, the shift has blurred the lines of district boundaries and has forced schools to seek fresh marketing initiatives to promote programs in order to compete with each other.

“It’s not a message that we think, in any way, that our neighboring school systems are not doing a good job,” said Jennings County Superintendent Terry Sargent. “The state has forced us to be more competitive with one another, so we are.”

This is not just a new reality for schools in southeast Indiana, but for districts across the state.

“We need to market our schools,” Doug Arnold, superintendent of north-central Indiana’s Maconaquah School Corporation, told StateImpact last November. “We used to take it for granted that people knew we were doing good things. We can’t do that anymore,” Arnold says.