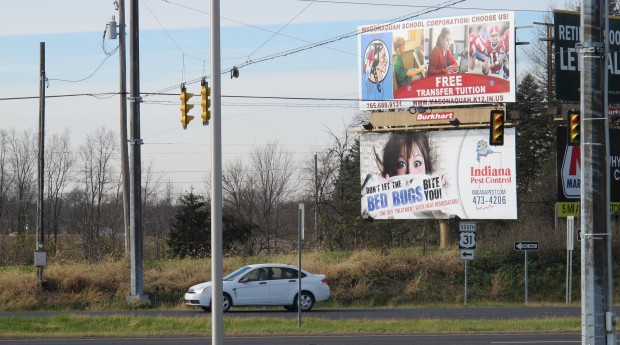 Without ever meaning to, I keep stumbling upon schools or districts where marketing is a critical part of overall strategy — whether in Marion, where billboards seek to boost the image of its high school; or in South Bend, where a Catholic school sent out mailers promoting the state’s voucher program.

Or on U.S. 31 outside of Peru, where I halted my southbound car to call the Maconaquah School Corporation about its billboard advertising “free transfer tuition.”

A change in state law allowing students to cross district borders more easily means marketing has become a key goal for Maconaquah schools, superintendent Doug Arnold told me. With a wider variety of school options, education ads are part of a “new reality,” he says.

“We need to market our schools. We used to take it for granted that people knew we were doing good things. We can’t do that anymore,” Arnold says.

The change to Indiana’s transfer rules took effect before the start of the 2010-11 school year, which no longer requires public school districts to charge families to accept transfer students — thus the “free transfer tuition” in the Maconaquah billboard.

As an Indiana Department of Education document says, “When a parent exercises an open enrollment opportunity, state support follows the student.”

It’s not just districts combing for transfer students. Gary schools posted billboards advertising a bump in state test scores this summer to try and stem the tide of decreasing enrollment. In January, the Foundation for Educational Choice started a $500,000 radio campaign aimed at promoting the state’s voucher program to legislators. 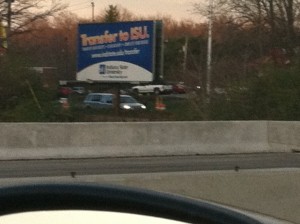 An advertisement for Indiana State University in Bloomington reads, "Transfer to ISU."

Is it just me? Am I the only one who thinks there’s more advertising? Share your experiences — or your photos — in the comments below. Have you seen more advertisements for schools in your area? (Or have you seen data suggesting advertising is on the rise?)

As a post-script, my education ad-filled trip wouldn’t be complete if I didn’t arrive home to a sign along State Road 45/46 in Bloomington (at right) saying “Transfer to ISU.” But that’s another story.