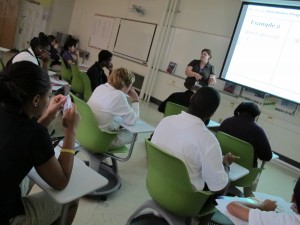 At a basic level, the state funding mechanism for Indiana schools is pretty simple: Count the number of students in each district once every year, then pay districts a certain amount of money for each one.

But the Indiana General Assembly changed that in a fundamental way last session when they added a second student count date.

That likely means, when lawmakers pass a biennial budget next year, Indiana districts’ state funding level will change between the fall and spring semesters as students enter and leave schools.

That’s a huge deal — we called the legislation “The Boring School Finance Bill That Could Change Everything” back in January. Now, it looks like IU’s Center for Evaluation and Education Policy, or CEEP, agrees with our conclusion.

(They agree, at least, that it could change everything — no word on the “boring” part).

A report by Terry Spradlin, Lindsi Lara and Christopher Wodicka that CEEP released this week finds Indiana would be the tenth state in the country to adopt more than one student count date in its school funding formula. State lawmakers still would have to build the new funding formula into next year’s budget — but the implications of such a move, they write, could be far-reaching.

On the plus side:

On the down side, multiple count dates take away the most basic advantage of a funding mechanism based on one count date: financial stability for districts. Spradlin, Lara and Wodicka explain:

There are concerns related to how multiple counts affect school budgeting. Declines in student enrollment may be dispersed across all grade levels and schools within the district, but may be minimal in particular schools or classrooms, making reductions in spending difficult. More importantly, decreased funding may require budget cuts and staff reductions during the school year which can be disruptive and/or detrimental to student learning. Current teacher contracts and termination statutes may limit the flexibility school districts have in making necessary expenditure reductions during a school year.

(As best as we can tell, the new second count date in February 2013 doesn’t have funding attached to it — yet. But the General Assembly talked about adopting a system that pays districts for how many students they enrolled over the last six months. If it adopts that system when it draws up its budget next year, the February 2013 number could become useful for the state as they dole out per-pupil money.)

It’s a big change. It’s also a bit complicated. What do you think of it? Is there something you don’t understand about the potential changes? Questions or quarrels always welcome in our comments section!