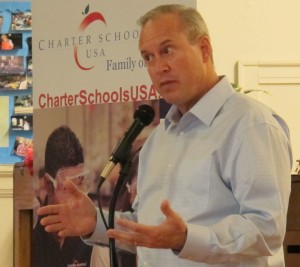 Charter Schools USA president and CEO Jon Hage speaks to a meeting in Indianapolis ahead as part of preparations for his company's takeover of Manual High School in July.

A nationwide report released Friday shows the number of companies founded to run schools on a for-profit basis has nearly doubled in the past decade, and the number of students enrolled in the schools these companies run has almost tripled.

But the report — from the National Education Policy Center — also offers insights on the past performance of the two biggest companies tapped to take over five “failing” Indiana schools.

Combined, three-quarters of the schools run by Edison Learning and Charter Schools USA did not meet their yearly federal progress goal, the report finds.

On the other hand, all but one of the schools Charter Schools USA operates received an A or a B under the state of Florida’s rating system.

As the report’s authors point out, only one other for-profit school company, had a lower percentage of schools make AYP than Charter Schools USA — White Hat Management, about which our friends at StateImpact Ohio have written a lot.

That said, it’s likely roughly half of all U.S. public schools also failed to make Adequate Yearly Progress, leading many to question whether it’s reasonable to hold schools to AYP goals.

Indiana education officials selected three outside companies to lead takeovers of five schools where — state officials believe — test scores haven’t improved enough or at all in the past six years.

EdPower, an Indianapolis-based organization that will take over Arlington High School in Indianapolis, was not included in the National Education Policy Center’s report.