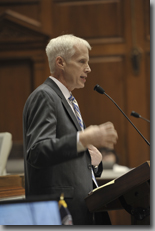 House Education Chair Robert Behning is one of a number of Indiana legislators with strong ties to the American Legislative Exchange Council.

This year’s legislative session is already underway and lawmakers are hurrying to put their bills forward for consideration. And where there are lawmakers, there are interest groups. The groups and their lobbyists can be tremendously effective in steering — or killing — legislation, so we’re helping you get familiar with them. Learn about the most important groups and individuals influencing your lawmakers with our series, “Meet the Influencers.” First up …

The American Legislative Exchange Council, or ALEC, is not a lobbying firm, but it has quite a bit of influence at the capitol. It’s an organization that brings together right-leaning businesses and legislators from statehouses all over the country. They meet at a series of annual conferences to, among other things, hammer out model bills to be introduced into state legislatures.

Many ALEC members are lawmakers. Indiana House Education Committee Chair Robert Behning’s resumé boasts of having held leadership positions within the group. And several organizations reported on Indiana State Superintendent Tony Bennett’s keynote address at a ALEC convention in Phoenix, AZ earlier this year. At the same conference, Indiana State Representative Dave Frizzell was appointed national chairman of the organization. The Evansville Courier Journal has a specific list of other Indiana legislators either working on or leading ALEC task forces.

In all, nine of the 150 members of the Indiana General Assembly attended the summit. About 20 more Indiana Republican legislators are members of ALEC but did not attend.

What Did They Do Last Session?

Lawmaker membership in ALEC has led to real legislative results. A recent report from the blog School Matters points to strong similarities between Indiana’s new voucher law and a piece of model legislation drafted by ALEC. They share a name — the ALEC written draft suggested the term “Choice Scholarship,” and the Indiana law is called the “Choice Scholarship” program. And the income limits for families wanting to participate proposed in the model legislation are also similar to the limits included in Indiana’s actual law.

Below, House Bill 1003 from last session, which mirrors model legislation from ALEC. Click on sections in the sidebar to see annotations.[documentcloud url=https://www.documentcloud.org/documents/275007-introduced-version-house-bill-1003.html format=normal sidebar=true ]

ALEC is not the only organization writing model legislation. The practice has been common for decades. The Anti-Defamation League, The World Health Organization, ProEnglish, The Marijuana Policy Project and countless other interest groups all draft this kind of material.

But one of the major differences between ALEC and these organizations is that the group is not legally involved in lobbying. According to a report from NPR and Internal Revenue Service records, the American Legislative Exchange Council is nominally a 501c3 nonprofit. They are therefore not required to disclose who funds their conferences and who makes contributions to lawmakers through their organization. The NPR report goes on to say that conferences hosted by ALEC are often lavish affairs attended by major corporations which lawmakers are under no legal obligation to report as gifts or donations.

But the legislators don’t have to declare these as corporate gifts.

What Does It Mean?

This osmosis between ALEC and state legislatures makes the group a good indicator of what bills one is likely to see coming from the conservative side of the aisle.

For example, higher education funding is one of the hot issues floating around the Indiana statehouse these days. Specifically, legislators are discussing a model which some lawmakers say would drive universities to focus on degree completion rather than enrollment. ALEC just released a report entitled “Ten Questions State Legislators Should Ask About Higher Education” which focuses on this very issue.

There are early rumblings this session that ALEC is working closely with Indiana legislators interested in drafting and backing controversial right-to-work bills.  Similar legislation was attempted during the last session, but was abandoned after a Democratic walkout led Governor Mitch Daniels to back off of an early endorsement of the proposal in favor of a platform which was more focused on educational issues.